After an initial silence, Islamic Relief decided to doctor its advertisements for the event by expunging all mentions that its leading anti-Jewish official would be speaking 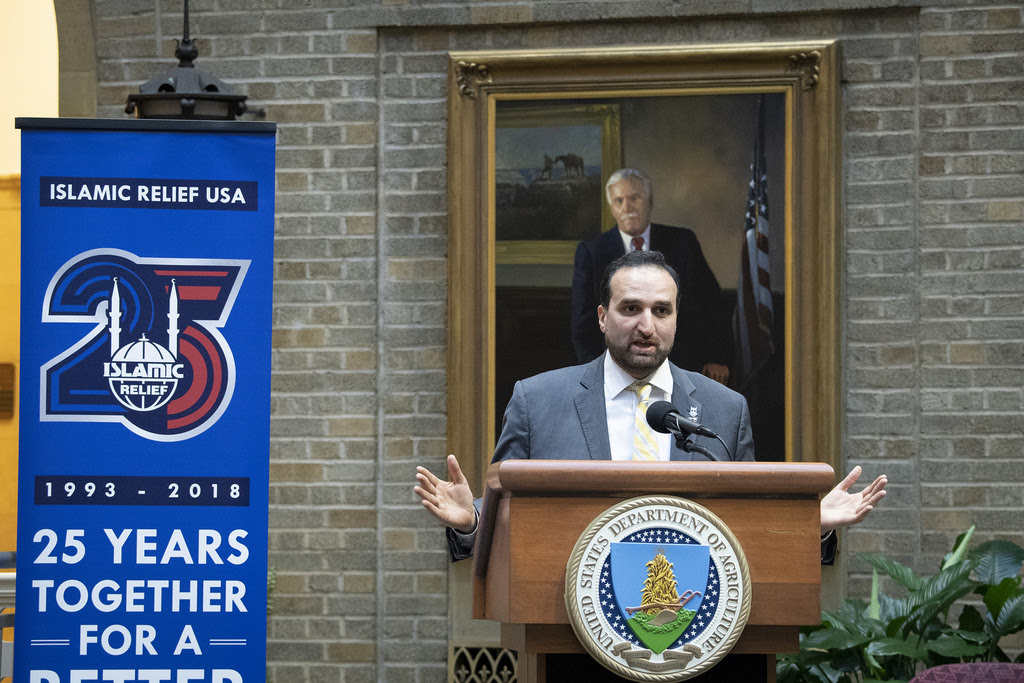 
Earlier this week, we broke the news that Islamist-linked congresswoman Ilhan Omar (already in the news after publishing anti-Semitic tweets) was due to speak at an event organized by Islamic Relief – an international aid charity accused of funding terror and extremism – alongside a senior Islamic Relief official who has published social media posts praising the killing of Jews.
[You can read the details of the Islamic Relief official's virulent anti-Semitism here.]
Our research was quickly picked up by a number of media outlets, including the Jerusalem Post, Washington Examiner, Daily Wire, JNS and others. The story went somewhat viral. Our blog post and the media articles covering our report were aggregately shared by over 70,000 people on Facebook, and another 40,000 on Twitter – reaching millions.
No wonder, then, that Islamic Relief started to feel the pressure.
After an initial silence, Islamic Relief decided to doctor its advertisements for the event by expunging all mentions that its leading anti-Jewish official would be speaking – even amending a glossy poster that it had previously published all over social media.
Islamic Relief and one of Rep. Omar's staff then promptly set about claiming that the official was never in fact due to speak. Unfortunately for them, there were boundless copies and screenshots of the posters and event webpages available to expose this lie rather quickly.
A number of media outlets roundly criticized Islamic Relief and Rep. Omar's denials, referring to their denials as "absurd." In a follow-up piece, the Washington Examiner's Quin Hillyer mused:

Meanwhile, the group sponsoring the dinner, IRUSA, denies any anti-Semitic activity, but still employs a man whose tweets express approval for the act of killing more than 20 Jews and firing missiles into Tel Aviv, along with one calling on God to "destroy [Zionists] as you destroyed the peoples of Ad, Thamud and Lot." And somehow, this IRUSA employee was mistakenly billed as a speaker at an event with Omar, due to ... an internal printing error?

Islamic Relief then lashed out at the Middle East Forum, telling the Jewish Journalthat:

As it's been mentioned previously to Middle Eastern Forum [MEF], which has a history of rehashing the same old falsehoods, IRUSA has taken steps to address individual employees' actions and behaviors that are contrary to the organization's values. Perhaps MEF conveniently left out mentioning a powerful column that was published regarding IRUSA's trip to the Holocaust Museum, as it would be inconsistent with their constant smear tactics. A simple Google search would have done the trick.

Notably, Islamic Relief does not mention what these "falsehoods" might be. Its spokesman is perhaps referring to a letter it sent to Member of Congress in July 2018, offering obfuscations and denials in response to a 2018 Middle East Forum report, cited in congressional testimony, exposing Islamic Relief's long history of ties to extremism and terror. At the time, we debunked Islamic Relief's denials thoroughly.
That we did not mention Islamic Relief staff visited a Holocaust museum seems a reasonable omission on our part. Better evidence that the international charitable franchise rejects anti-Semitism would be to: fire its anti-Semitic officials (including Islamic Relief USA's chairman); stop giving anti-Semitic clerics platforms at Islamic Relief events; and stop subsidizing the genocidally anti-Semitic terrorist group Hamas.
Amazingly, the Ilhan Omar debacle was not the only Islamic Relief story we published this week. Writing in the Rabwah Times, Islamist Watch revealed that Islamic Relief's branch in Tunisia had reportedly been implicated in a Tunisian terror finance investigation, according to a leaked government report.
Islamic Relief Worldwide, the Islamist franchise's headquarters in the U.K, quickly condemned our coverage, referring to it as "deeply misleading" and stating, "The Tunisian Commission for Financial Analysis (CTAF), a government body cited as the source of the leaks, has publicly denied issuing the alleged report and has issued a public statement distancing itself from the allegations."
This attempt at evasion had in fact been preemptively addressed in our article. The Tunisian governmental body did indeed deny publishing a report, but as we and the Tunisian media pointed out: no one claimed the report was published; it was leaked. More interestingly, the government pointedly refused to deny that the report in facts exists, only stating that it hands its findings "exclusively to the Public Prosecutor's office."
Politicians and journalists all around the world are beginning to investigate the extremism and duplicity of the Islamic Relief franchise. That it has chosen to rush out ill-considered denials and launch attacks on its critics is only helping speed that process along.
[Read our 2018 report into Islamic Relief here]
Sam Westrop is the Director of Islamist Watch, a project of the Middle East Forum.