US State Department: Hamas is Responsible for Civilian Casualties


State Department spokeswoman reminds reporters that Israel is defending itself against endless rocket attacks by Hamas. 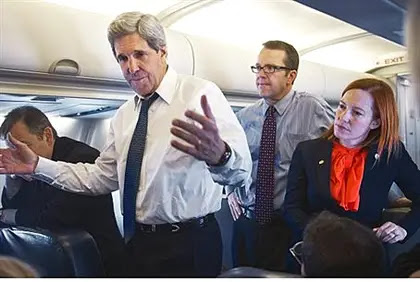 The United States reiterated on Thursday its support for Israel in defending itself.
Speaking to reporters, State Department spokeswoman Jen Psaki reminded that Hamas was responsible for civilian deaths because of its rocket attacks against Israel.

“Civilians have been killed, and certainly that’s of concern to us, and that’s one of the reasons that we have been certainly calling for all sides to de-escalate tensions on the ground,” she said, when asked by a reporter if she thought that “the utility of an F-16 to bomb a home and kill five civilians was appropriately done.”

Psaki continued, “It’s tragic and our condolences go out to the families, but I would remind you who is at fault here, and that is Hamas and the indiscriminate attacks that they have launched against Israel.”

“There’s a difference between Hamas, a terrorist organization that’s indiscriminately attacking innocent civilians in areas where there are innocent civilians in Israel, and the right of Israel to respond and protect their own civilians. And that’s what we’re seeing on the ground take place,” she added.

Earlier this week, the United States condemned the rocket fire by Hamas against Israel, but also called on Israel to “act with restraint” in its response.

Secretary of State John Kerry has been engaging with Mideast leaders and others in a bid to halt escalating Israeli-Palestinian Arab violence.