North Korean defector Ahn Myeong Cheol, tells Arutz Sheva his incredible story - and how he hopes to take Kim-Jong Un to the ICC. 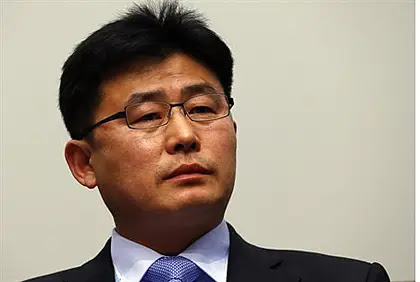 Ahn Myeong Cheol (file)
Reuters
North Korean dictator Kim-Jong Un could be charged in the International Criminal Court (ICC) after Tuesday, when the United National General Assembly (UNGA) will vote on a crucial resolution condemning the human rights violations in North Korea, which it described in February as “without parallel in the contemporary world.”

To get a sense of the scope of the vote, Arutz Sheva spoke to Ahn Myeong Cheol, a North Korean defector who has risen to become a prominent activist for human rights, and is now the director of the North Korea Watch NGO.

Ahn also made headlines recently for spearheading a combined effort by 20 North Korean defectors to appeal to the Swiss government to freeze the bank assets of senior North Korean government members, including Kim Jong-Un - an effort which achieved a rare public response from Swiss President Didier Burkhalter.

Ahn first spoke to Arutz Sheva about his unique experiences in his home country. He came from a high-ranking family in North Korea; his father was a party member, and it made him eligible to become a guard at a political prison camp at the age of 18 - a coveted position.

The response sparked his curiosity, he said, but he didn't "realize the full reality of the North Korean regime" until he was thrust on the other side of the political power divide.

"One day, my father said criticism against the North Korean regime," he said. "Because of that, my mother, sister, and brother were taken to the political prison camp - and my father committed suicide."

After his family was torn apart, Ahn felt he had to escape and made his way to China, and later South Korea, where he restarted his life in 1994.

Since then, he has become an outspoken advocate for human rights in his home country.

"Last year, the United Nations established the Commission of Inquiry for Human Rights in North Korea," he continued. "They investigated the human rights [situation] in North Korea for one year. Because of that, the UN General Assembly will, today, adopt a resolution with the material necessary to send Kim Jong-Un to the International Criminal Court [ICC]."

To that end, Ahn said, the UN has been incredibly helpful for spreading awareness.

Ahn noted that he himself gave testimony on his experiences to the UNHRC Commission of Inquiry on North Korea, and that it helped spread awareness of the issue.

"I could not do all this work by myself," he said, noting that the joint initiative helped him achieve some of his goals.

Ahn also noted that the efforts to have Kim Jong-Un charged at the ICC could potentially be met with opposition from the UN itself. He noted that Russia and China, two of North Korea's closest political allies and world superpowers, are prominent members of the UN Security Council, but added that he hoped that the initiative could at least steer legal action against the dictator in the right direction.

Ultimately, Ahn urged the international community to maintain pressure on the North Korean leadership regarding its human rights issues, beyond the one-year investigation launched by the Commission of Inquiry.

As for the general public?

"The general public needs to educate itself about this situation," he said. "There are many documents and videos relating to North Korea human rights. They need to first learn about it, to read those documents, and then talk to others about these issues so that they can think about and discuss solutions to human rights violations [there]."