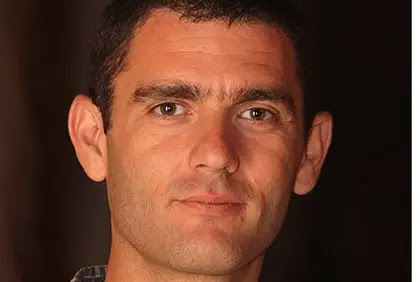 Matan Peled, Im Tirtzu chairman
Im Tirtzu
Grassroots Zionist organization Im Tirtzu has published a new report in which it alleges that as elections draw closer, there has been “a strengthening and tightening of the ties between the New Israel Fund and the Labor Party.”

The NIF has invested efforts in “embedding NIF officials into the Labor Party list,” charges Im Tirtzu, indicating that the NIF “sees the Labor Party as the means by which to assert its influence over the legislative branch.”

The group further alleges that the attempts "to insert NIF officials, who categorically support organizations that are at their core anti-Zionist and who are working to increase the delegitimization against Israel, into the Labor Party,” constitute “political whitewashing.” It explains that “whitewashing” is made possible by the fact that the Labor Party is seen by the Israeli public as a center-left Zionist party, and states: “If such a party were to promote discourse and bills which seek to undermine the state of Israel’s Jewish-democratic identity in the Knesset, then as a result, Jewish-democratic discourse would be limited to the realm of Israel’s right-wing, and consequently diminished.”

The report lists several examples of what it says are the increasingly strong connections between the NIF and the Labor Party:
Naomi Paiss, Vice President of the NIF, replied:


As usual, considering the source, this report is riddled with factual inaccuracies. Just in the first two pages:
Michael Mannekin is not the CEO of Molad
Amir Peretz is not on the NIF board
And Avraham Burg has not been on the NIF board for several years now.
As important, there is no difference between the friendly connections between NIF leadership and other progressives in Israel’s center-left, than between the hard-right settler organizations and the politicians in Jewish Home or Likud. Certainly Ronan Shoval, founder of Im Tirtzu, has always had strong ties to these parties and is now a leading candidate for Jewish Home.
The New Israel Fund does not engage in partisan politics, support candidates or parties, or fund partisan activities. Some of our leadership may, as individuals, donate to primary candidates in various parties as permitted by Israeli law.
In other words, this “report” is smear politics, but considering a court has found Im Tirtzu to have “fascist attributes,” we are surprised that even Arutz Sheva would take this seriously.