What Were Armed US Consulate Staff Doing near Adei Ad? - Ari Soffer 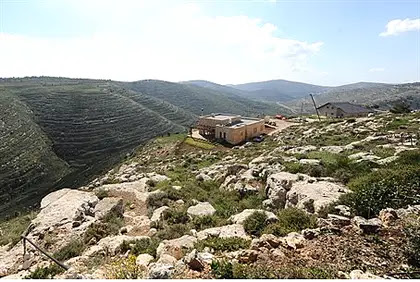 Adei Ad is located in the Shiloh bloc north of Jerusalem
Mendy Hechtman/Flash 90
The full details of Friday's clash between residents of the Jewish village of Adei Ad in Samaria and a delegation from the US Consulate in Jerusalem - which very nearly escalated into a fully-fledged shootout between the sides - are still emerging.

But those details which have emerged so far paint a worrying picture regarding the conduct of Consulate staff - who either willingly took part in a planned provocation, or else, in a staggering show of irresponsibility and unprofessionalism, recklessly blundered into a volatile and potentially deadly situation without the slightest idea of what they were doing.

Roughly two hours before the start of Shabbat, a group from the Consulate, escorted by armed (apparently American) guards and several residents of the Arab village of Turmus Ayya, descended en-masse and unannounced on an area within 50 meters of Adei Ad's southwestern edge. Neither the IDF nor local residents were informed of the visit beforehand.

The Consulate delegation had apparently been "invited" by Palestinian Arabs from Turmus Ayya, many of whom hold US citizenship, ostensibly to see the site of what Arabs claim was an "attack" by Adei Ad residents on an olive orchard. That incident was originally reported Thursday night by the PA's Bethlehem-based Maan News, which claimed that Jewish "settlers" had uprooted 5,000 olive trees - a rather incredible number to those familiar with quite what such a mammoth task would entail. Subsequent reports later revised the number down to 500, although no independent verification or evidence of the alleged damage has surfaced as yet.

Adei Ad residents, alarmed at the unannounced arrival of a large group from a Palestinian village within meters of their community, rushed out to confront them. A brief verbal altercation ensued which quickly escalated, with youths from Adei Ad hurling rocks at the delegation, causing some damage to a Consulate vehicle.

At this point the accounts vary; witnesses from Adei Ad say Consulate staff drew their weapons - an M-16 and a handgun - following which residents called for backup from Adei Ad's own security team. The Consulate, for its part, has denied any weapons were drawn at all. Either way, the American delegation beat a hasty retreat.

Notably, at no point during the confrontation was the IDF alerted by the Consulate team; only after leaving the scene did the Americans call the army, who quickly responded and launched an investigation, which is still ongoing.

Damage to US Consulate vehicle Rabbis for Human Rights
Whatever the case, Jewish residents of Adei Ad and surrounding communities in the Shiloh bloc, located in the Binyamin region to the north of Jerusalem, are demanding answers. Angry residents say the incident was clearly a planned provocation, and have expressed their astonishment at the fact that an armed entourage from the US Consulate would arrive at a contested spot without coordinating their visit with the IDF in advance.

Indeed, regardless of the intent behind the visit, one Adei Ad resident pointed out that it was a clear recipe for disaster.

Apart from being the location of a protest in December 10th in which senior PA official Ziad Abu Ein died of a heart attack, the site of Friday's confrontation is also the precise spot where a group of Palestinians attempted to infiltrate Adei Ad just two weeks ago.

"Two weeks ago at that exact place a horse was stolen," said the resident, who asked to remain anonymous. "At 10 p.m. that same night dozens of Arabs from a nearby village came up to Adei Ad at the same spot, and residents came out to keep them away."

Recounting Friday's incident, he said residents had no idea Consulate staff were present at all. All they saw, he said, was "Arabs approaching, accompanied by what looked like a group of Europeans - we didn't know who they were exactly. Often foreign anarchists join the Arabs in carrying out violence or provocation."

Due to the tense relations between Jews and Arabs in the area, Arab farmers must contact the IDF before working land that abuts Adei Ad in order to avoid any confrontations. For their part, Adei Ad residents have long complained that they have been regularly targeted by Arab thieves and vandals.

"About two years ago a group of Arabs actually came right up to my house, right into the enter of Adei Ad, and stole a whole herd of sheep. In the past they've stolen horses, they stole a tractor, building equipment," the resident recounted.

"The Arabs know that if they want to come that close to Adei Ad to do agricultural work they need to let the army know first to escort them. So any time Arabs approach without army supervision - particularly in that place where two weeks ago there was an incident - that's a sign that they are coming to cause trouble... to attack or damage property," he added.

He said locals had long given up on the prospect of receiving help from police, who he accused of totally avoiding their responsibilities and only agreeing to investigate Palestinian accusations against them.

"We receive no backing from the police," he lamented. "Every time there is an incident of robbery by the Arabs the military refuses to deal with it because they don't look at it as life-threatening; and the police... they tell us that it's out of their jurisdiction.

"On the other hand, every time the Arabs steal something or cause trouble they then go and report us to the police - that's how they work - so it's always a one-sided investigation, because the police claim they have no jurisdiction over the Arab villages, only over us! No one has ever been charged, no property has ever been returned."

He emphasized that despite the negative characterization of Adei Ad and surrounding Jewish communities in the area by some media outlets, residents are not interested in trouble and just want to get on with their daily lives in peace.

"We have much better things to do with our lives - we have our children and families, and we have jobs," he said. "We don't enjoy going out and having rock-throwing fights... no one seems to realize... but we feel we are under threat and that if we don't do it the next step is a terrorist attack."

Responding to American denials that Consulate staff pointed their guns at residents, a local security source said there was "no question" they had indeed drawn their weapons, based on the individual testimony of numerous witnesses.

The security source, who also asked to remain anonymous, said one American "with ginger hair" was seen pointing his pistol at residents, who were unarmed, from inside of his car after rolling down the window. The other armed man then did the same with an M-16 rifle.

It was then that the situation threatened to get out of control.

"News spread that some people had approached the town with weapons, and they called for help," prompting armed members of the local civilian first-response team to rush to the site, he recounted.

Luckily, "at that point it seems like the Americans thought it would be a good time to leave... and after that there was a brief confrontation between the Arabs and (Jewish) residents until the army arrived."

He said that although an investigation was still ongoing, the conduct of the Consulate delegation was "suspicious."

"Why didn't they call anyone while the confrontation was going on?" he asked.

He also described the "strange" behavior of the Consulate guards when they were finally met by IDF forces and first-responders, describing them as looking sheepish and, unprompted, immediately insisting they hadn't drawn their weapons.

Marc Prowisor, a resident of the nearby town of Shiloh, said the latest confrontation posed some "difficult questions."

"Were members of the American Consulate knowingly taking part in a larger provocation - which is against the law?" asked Prowisor who, as Director of the One Israel Fund charity which helps secure local communities, is in regular contact with local security forces.