Central European nations Slovakia, Czech Republic, Hungary and Poland are preparing to reject EU immigrant quotas, and guard their borders with barriers and military, to try to save their countries from an apocalyptic Muslim migrant invasion


Central European nations Slovakia, Czech Republic, Hungary and Poland are preparing to reject EU immigrant quotas, and guard their borders with barriers and military, to try to save their countries from an apocalyptic Muslim migrant invasion caused by the U.S.-led destabilization of the Middle East. 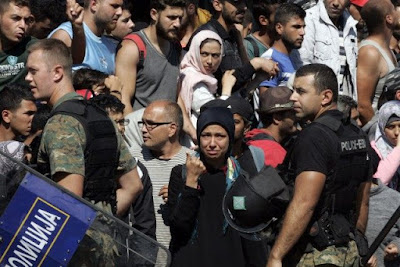 The hindsight rearview mirror is looking clearer all the time, as the fruits of the “Arab Spring” revolutions, which swept away stable if autocratic governments only to allow the brutal rise of the Islamic State Caliphate, are now ripening in the form of millions of migrants fleeing Syria and Iraq, and entering Europe through the Balkans.


"has provided the hothouse for the growth of the extremist Islamic State. In due course, it spilled over from Syria into Iraq, and it has issued threats against the American homeland. The Obama-Kerry policy has also made for the more than 190,000 deaths in Syria, 500,000 wounded, and 8 million refugees (more than 2 million abroad, 6 million inside Syria) — this, out of a population of about 22 million.

And that was in August 2014. In May of this year, declassified Defense Intelligence documents revealed that the Obama administration actually did create ISIS as a tool against Assad. Per a report in the US Herald:

"Thanks in part to the declassification of Defense Intelligence documents, connecting those missing dots seems to have finally reveled [sic] what most Middle East observers have suspected all along, that the rise of the terrorist group ISIS and the likelihood of establishing a terror state (a caliphate),  had been predicated by both the CIA and DIA, as far back as 2012.

And purposely created by the Obama Administration in part to isolate the Syrian government of President Bashar al-Assad. The documents also predicted that the support given by the West, Turkey and the Persian Gulf Arab states to the Takfiri militants would eventually lead to the establishment of a Salafist Principality in Eastern Syria.
According to investigative reporter Nafeez Ahmed, the “leaked document reveals that in coordination with the Gulf states and Turkey, the West intentionally sponsored violent Islamist groups to destabilize Assad, despite anticipating that doing so could lead to the emergence of an ‘Islamic State’ in Iraq and Syria.”
Judicial Watch press release detailing the released documents. Here are the released documents themselves.

That revelation was confirmed via a separate source in a report from WND on August 11, which states,

The White House made a conscious decision, he said, when it sponsored the radical jihadists who later became the Jabhad al-Nusra and the Islamic State of Iraq and Syria, or ISIS, to fight the Assad regime.
Flynn also said that he backed a 2012 Defense Intelligence Agency document that recently was obtained by Judicial Watch through a Freedom of Information Act request.

And now we are witnessing the fallout from the Obama administration’s policies, as millions of Middle East migrants flood Europe. Of course, there is no leisure time for the Pew Forum to conduct research polls on the religious makeup of the migrants, but it’s a safe bet that we’re looking at a demographic spread of at least 10-1, Muslim to Christian, given the collapse of the Christian population in Iraq and Syria already; the ratio is likely much more extreme.

Slovakia had already rejected the EU’s quotas, denying entry to Muslim refugees and stating they “will only accept Christians.” Now in the Reuters report (below), we see the the so-called Visegrad 4 countries preparing to form a united front against the Muslim migrant invasion directly caused by Obama’s policies.

The leaders of the four brave countries know who is behind this catastrophe. Slovak Prime Minister Robert Fico defiantly “said Europe should focus on tackling the causes of the crisis and criticised Western support for opposition groups in Syria and Libya, saying that had helped fuel the civil wars there and thus the flight of so many people.”

Slovakia and the Czech Republic hope to forge a common position with Hungary and Poland on Europe’s migrant crisis that would reject any EU quotas for redistributing the immigrants, the two countries’ leaders said on Monday.
Czech Prime Minister Bohuslav Sobotka has invited his counterparts in the so-called Visegrad 4 group to discuss the crisis in Prague on Friday, a spokesman said.
The outcome is likely to be a hardline stance on the issue that the EU’s central European states will take to an extraordinary meeting of EU interior ministers on Sept. 14.
Hungary’s status as an eastern outpost of Europe’s passport-free Schengen area has made it a transit route for tens of thousands of migrants from the Middle East and beyond heading for western Europe via the Balkans. Hungary has responded by erecting a fence along its border with Serbia.
The central Europeans have blocked proposals from Brussels that envisage EU member states accepting binding quotas to share out asylum-seekers crossing the Mediterranean to Italy and Greece. Since then, voluntary offers by member states to take in immigrants have fallen short of the needed numbers.
French Foreign Minister Laurent Fabius has called their stance “scandalous”.
German Chancellor Angela Merkel said the future of Schengen would be in question if Europe cannot agree on redistributing refugees.
Slovak Prime Minister Robert Fico said binding quotas would not happen.
“We strongly reject any quotas … If a mechanism for automatic redistribution of migrants is adopted, then we will wake up one day and have 100,000 people from the Arab world and that is a problem I would not like Slovakia to have,” Fico told a news conference shown live on television.
“We are prepared to do what is needed and what is within our possibilities, for people who really need help, separate them from economic migrants,” he added.
Czech President Milos Zeman said the country should reject quotas and increase its border protection, given the EU was unable to do so.
“The Czech Republic should take care of its borders on its own, it should expel illegal migrants … even using the army, should it be needed,” Zeman said.
Fico said Europe should focus on tackling the causes of the crisis and criticised Western support for opposition groups in Syria and Libya, saying that had helped fuel the civil wars there and thus the flight of so many people.
Most of the migrants arriving in Hungary aim to move on to wealthier countries further west such as Germany, which is expecting an influx of some 800,000 people this year alone.
Austria, another favourite destination, tightened border controls on Monday, days after discovering a truck with the remains of 71 people thought to be Syrian refugees.
Slovakia, which lies north of the main ‘Balkan route’ for migrants passing through Hungary, has seen only a fraction of the numbers flowing through Hungary and received only 109 requests for asylum since January.