The Disintegration of Syria and Its Impact on Israel - Brig.-Gen. (res.) Yossi Kuperwasser


Syria’s fragmentation into separate, battling enclaves is intensifying. The two main enclaves are “central Syria,” controlled by the Assad regime, and the Islamic State.


The Assad regime and Hizbullah, like the opposition, have been taking heavy casualties. In an unusual speech on July 26, 2015, President Bashar Assad explained that in light of a manpower shortage, the regime’s army is unable to reconquer all the territories that the opposition has seized.
The nuclear deal between Iran and the world powers has boosted Iran’s capacity to support the Assad regime. The anticipated lifting of the sanctions on Iran is set to enable it to funnel additional resources to this purpose, to which Iran assigns very high priority.
Iran and Hizbullah’s attempts to create a base for terror activity against Israel from the northern Golan Heights apparently continue, relying on released terrorist Samir Kuntar and Druze elements.
Against the backdrop of the nuclear deal, there are increasing chances of cooperation between the United States, Iran, and Assad, and possibly also Turkey and Saudi Arabia, in the campaign against the Islamic State. 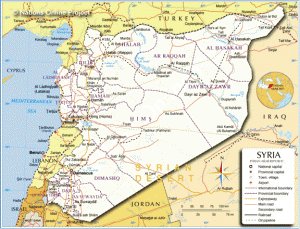 The complex civil war in Syria keeps developing in ways that reinforce the trends that have been evident for some time. Despite the reports on a number of proposals for ending the conflict, the chances of fostering a breakthrough remain unclear.

The recent period has seen the following notable developments:

The Assad regime, with the help of Hizbullah, continues to entrench its control of areas it regards as vital, namely, the Damascus-Homs-Hama coastal axis and the vicinity of the Lebanese border. Following the takeover of Qusayr and with the conclusion of the battles in the Qalamoun Mountains (with gains by Hizbullah but without a clear victory), the battle for Zabadani began. Although the regime and Hizbullah forces have made gains in this theater, where they enjoy a clear advantage, they have not yet been able to defeat the opposition, which in this area comprises local, relatively less extreme forces. In any case, the regime and Hizbullah, like the opposition, have been taking heavy casualties. In an unusual speech on July 26, 2015, President Bashar Assad explained that in light of a manpower shortage, the regime’s army is unable to reconquer all the territories that the opposition has seized, and accordingly he has to prioritize which territories to contest based on military, demographic, and economic considerations.

Turkish involvement is growing. Following the Islamic State terror attack in the Turkish town of Suruc on the Syrian border and the spate of terror attacks by the Kurdish underground within Turkey, the Turks decided to attack targets of the Islamic State and of the Kurdish underground in Iraq and to allow the United States to strike Islamic State targets in Syria and Iraq from the Incirlik Air Base in southern Turkey. The United States and Turkey have also agreed to set up a safe zone along 95 kilometers of the Syrian border, thereby making it possible for Syrian refugees in Turkey to return to Syria. Meanwhile, Turkey is concentrating on attacking Kurdish targets, actions that, some believe, were approved by the Americans. In the face of Kurdish criticism, the U.S. Administration was forced to deny that the actions had received Washington’s approval.

Turkey and the Kurds

Against this backdrop, tension is mounting in the Kurdish part of Syria. The area has been taken over by the PYD – the Syrian sister movement of the Turkish PKK, which cooperates with the Assad regime and is successfully fighting the Islamic State in the areas of Kobani and Tall Abyad. Its military force, the PYG, is being aided by Peshmerga forces sent from Iraqi Kurdistan. In light of Turkey’s actions against the PKK, there are signs of stronger unity among the different Kurdish factions in Syria. Considering, however, that these factions tend to be suspicious of each other, this may be a temporary phenomenon.

The nuclear deal between Iran and the world powers has boosted Iran’s capacity to support the Assad regime. The anticipated lifting of the sanctions on Iran is set to enable it to funnel additional resources to this purpose, to which Iran assigns a very high priority. In addition, some believe that the United States now sees Iran as a subcontractor that will fight the Islamic State, which imperils Assad, and is ready to accept a central Iranian role in dealing with the crisis. Not surprisingly, then, the regime feels that it has been strengthened and is waiting for its expectations to materialize.

Noteworthy in this context are the increasing contacts among supporters of the Assad regime, including the recent visit to Tehran by Syrian Foreign Minister Walid Muallem and Russian Deputy Foreign Minister Mikhail Bogdanov, who holds the Syria portfolio, apparently to discuss how the nuclear deal affects Syria and the various proposals for a settlement.

Meanwhile, the regime keeps losing assets in areas it does not regard as strategically crucial. That is especially the case in the areas south and east of Damascus, including the Daraa, Sweida, and Tadmur (Palmyra) regions, and also in the north and particularly the Idlib and Aleppo regions. Recently the important city of Qaryatayn to the east of Homs (where many Christians live) fell to the Islamic State, and battles are raging around Hama, in which control of the territory keeps shifting back and forth. Many analysts have hastened to conclude from this phenomenon that the regime’s demise is now inevitable, its remaining days rapidly dwindling. It is doubtful, though, that this perception is accurate and even more doubtful that the perception has trickled down into the ranks of the regime. There appears to be no increase in the rate of senior figures’ desertion from its ranks.

As for the opposition, the Islamic forces keep gaining strength. The blow dealt by the Al-Nusra Front to Division 30 rebel troops, some of whose fighters were trained by the Americans, is further evidence of this fact. Although the Americans, nonplused, assert that from now on they will also protect the forces they have trained against their foes even within the opposition, it is doubtful that they will be able to do so. Meanwhile, the significance of the name-change for the grouping of Islamist factions that are less extreme than the Al-Nusra Front and the Islamic State is still unclear. At first this grouping called itself Jaish al-Fatah (the Army of Conquest/Victory), and it made gains in the Idlib region. Later it changed its name to Jaish al-Umawayn (the Army of the Sons of the Nation), emphasizing its members’ Syrian identity. Forces belonging to this grouping have been playing a central role in the fighting in the Zabadani area.

The contacts between Saudi Arabia and Russia, particularly the visit to Moscow by Defense Minister Muhammad bin Salman (the son of King Salman), are also viewed as potentially affecting the course of the Syrian imbroglio. Some see the beginnings of a Saudi-Russian understanding where, in return for the huge deal with Russia involving military purchases and the building of a nuclear power station, Russia will loosen its support of Assad and agree to his being replaced. Others see indications, conversely, that the Saudis have despaired. It is unclear to what extent either evaluation has any real basis. In any case, most of the reports claim that Saudi Arabia is offering to stop backing the opposition in return for certain concessions by Assad and his supporters.

Iran, Hizbullah and the Druze

Iran and Hizbullah’s attempts to create a base for terror activity against Israel from the northern Golan Heights apparently continue, relying, among other things, on the support released terrorist Samir Kuntar enjoys among Druze elements in the border town of Al-Khader and on the assumption that the Assad regime will look favorably on such actions even if it does not initiate them. The attack attributed to Israel on a vehicle containing some Iranian and Druze Hizbullah operatives who, according to the reports, were killed, reflects this phenomenon. Israel is evidently working to prevent its enemies from exploiting the Syrian chaos to attack it or improve their capabilities to do so in the future.

Anxiety over these developments appears to be growing in the Druze community. Traditionally, the Druze have been committed to their Syrian nationality and to the Alawite-led alliance among the minorities that constitute about 40 percent of the country’s population. However, the less the regime controls the periphery as it focuses instead on maintaining control of “little Syria,” the more the Druze fear it will abandon them. In the main concentration of the Druze – the Druze Mountain, centered on the city of Suwaida – there is considerable concern about the fall of the nearby base of the Syrian army’s Brigade 52 into opposition hands. The regime’s attempts to maintain control in the area via the Alawite militia, the Shabiha, and to recruit Druze to its ranks have been opposed by local leaders, who have taken matters into their own hands and are even considering cooperating with the relatively moderate opposition forces active in the southern region, thereby countering the more substantial threat posed by the Islamic State after its conquest of Tadmur (Palmyra). As noted, the situation in the town of Al-Khader, situated on the Israeli border in the northern Golan Heights, is different, with the regime managing to maintain its control and retain the town’s loyalty, at least on the surface.

Given that Druze see themselves as mutually responsible for each other wherever they are located, these developments have direct implications for the Druze community in Lebanon and in Israel. The attacks by Druze on Israeli ambulances carrying injured Syrians, which occurred on the Israeli Golan and near Horfish in the Galilee, have sparked growing tension between the Druze, particularly in Al-Khader, and the relatively moderate opposition, which is perceived as being aided by Israel. Israel needs to intervene in this issue and reinforce its policy of avoiding direct involvement in the war while ensuring the security of the Druze, taking into account the blood pact between them and the Jewish people.

The main implications that emerge from these developments are:

Syria’s fragmentation into separate, battling enclaves is intensifying. The two main enclaves are “central Syria,” controlled by the Assad regime, and the Islamic State. Other enclaves are controlled by the communities that populate them (the Kurdish region in the north and the Druze Mountain in the south) or by Sunni opposition elements (part of Aleppo, Idlib, the southern Golan, and numerous rural areas around the main cities, including Damascus). All factions are fighting to expand their spheres of control or prevent gains by their enemies; and while each of these factions is pursuing local offensives and succeeding, the Islamic State is expanding its control in a way that could have strategic ramifications.

The fear of the Islamic State will probably lead external actors to boost their involvement in the fighting, thereby lessening the centrality of the regime’s struggle against the other insurgent groups. Against the backdrop of the nuclear deal, there are increasing chances of cooperation between the United States, Iran, and Assad, and possibly also Turkey and Saudi Arabia, in the campaign against the Islamic State. This situation, apparently, forms the background for initiatives to bring the war to an end.

Gains by the Assad regime, Iran, and Hizbullah in the crucial area of the Syrian-Lebanese border are likely, under these circumstances, to lead to intensified efforts by Iran and Hizbullah, as a secondary theater, to build capabilities for attacking Israel in the northern Golan.

In light of all these factors, and given the ongoing human distress, Israel may have no choice but to reconsider its policy toward the developments in Syria.

Copyright - Original materials copyright (c) by the authors.
Posted by Sally Zahav at 4:11 AM