In recent days, Russian Prime Minister Dmitry Medvedev and Russian media outlets warned that, if Turkey and/or Arab states send ground troops into Syria, the conflict may escalate into a regional war or even a new world war.

In a February 11, 2016 interview with the German paper Handelsblatt, Russian Prime Minister Dmitry Medvedev warned that if Arab countries sent ground forces into Syria, this could spark a new world war.[1] According to an English report about the interview published on February 12, he said that “all ground operations, as a rule, lead to permanent wars," and added: "The Americans must consider – both the U.S. president and our Arab partners – whether or not they want a permanent war... We must make everyone sit down at the negotiating table… rather than start yet another world war.”[2] 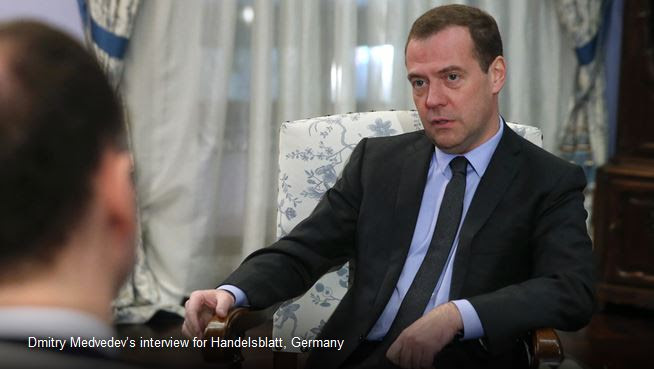 The Russian RBC news agency reported that, at the February 13, 2016 Munich Security Conference, Medvedev stated that the world has slid into a new cold war, when it actually needs cooperation, not confrontation and a "third world shake-up."[3]

The Russian daily Komsomolskaya Pravda quoted military expert Mikhail Timoshenko as saying that, if Turkey and Saudi Arabia invaded Syria, "it would not be an easy situation for the Russian aviation group." He explained:  "It's one thing to bomb terrorist groups, [but] Moscow could hardly target American or British troops, or the Turkish or Saudi armies. That would effectively mean a third world war." Timoshenko expressed hope that "the U.S. will prevent Turkey from invading, because [U.S.] President Obama hardly wants to be remembered as the leader who started World War III."[4]

In an article on the Russian online paper Gazeta.ru, journalist Igor Kryuchkov quoted Dmitry Danilov, head of the European Security Department at the Europe Institute of the Russian Academy of Sciences, as saying: "If, under the pressure of [Syrian] government troops, Syrian rebels move from the Aleppo area towards the Turkish border, this will require quick decisions from Turkey. First, what to do about the rebels. Support them with [Turkish] army forces? [Second,] if an invasion [is in order, should it be] carried out with Saudi Arabia and other Arab states?..." Kryuchkov concluded that "Turkey has to find the answers to these questions very soon. The situation in the Aleppo area can provoke Turkey to nervous action that can turn the Syrian crisis from a local conflict into a regional war."[5]