The United States, after being frozen in place for months in the Middle East, suddenly sprang into action in the past 48 hours, along with its senior Middle East allies, Israel and Saudi Arabia, on four fronts: Iraq, Syria, Yemen and the Palestinians.

The US hands-off to Iran’s top general in Iraq, Ali Abdullah Saleh’s changeover of sides in the Yemen war and Trump’s’ thinking on Jerusalem – all signal a new, proactive US strategy for the region.

Central Intelligence Agency chief Mike Pompeo was uncharacteristically frank when he addressed high-ranking US military and security officials on Saturday, Dec. 2, at the Reagan Presidential Foundation. He revealed that he had sent a note to the Iranian Revolutionary Guards Al Qods chief, Gen. Qassem Soleimani, and explained: “I sent it because he had indicated that forces under his control might in fact threaten US interests [i]n Iraq.”

Soleimani replied that he had refused to open the letter, commenting: “It didn’t break my heart to be honest with you.” Pompeo went on to elaborate: “What we were communicating to him in that letter was that we will hold him and Iran accountable… and we wanted to make sure that he and the leadership of Iran understood that in a way that was crystal clear.”

Since words clearly don’t mean much without deeds, the United States, after being frozen in place for months in the Middle East, suddenly sprang into action in the past 48 hours, along with its senior Middle East allies, Israel and Saudi Arabia, on four fronts: Iraq, Syria, Yemen and the Palestinians. 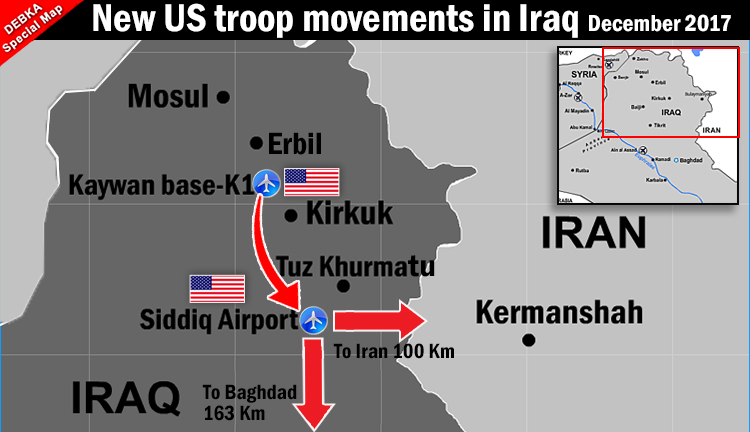 IRAQ:  Large-scale US forces arrived at the Kaywan base-K1 west of the oil city of Kirkuk and then split into two contingents: several hundred troops stayed on base while the second contingent headed east on Friday, Dec. 1 towards Tuz Khumatu in eastern Iraq (See attached map)  and took control of the Siddiq military airport 35km to the west. Tuz Khumatu lies 100km west of the Iraqi-Iranian border and 163km north of Baghdad. DEBKAfile’s military sources report that American troops have never been deployed so close to the Iranian border since the 2003 US invasion of Iraq. This movement was meant to strongly advise Iraqi Prime Minister Haydar al-Abadi to stop playing ball with Iran to the extent that he did in mid-October, when he allowed pro-Iranian forces to grab Kirkurk and its oilfields from the Kurds. Washington was chiefly drawing a large X on Soleimani’s plan for bringing  Northern Iraq’s oil under Iranian control.

SYRIA: Early Saturday, Dec. 2, Israeli warplanes dropped missiles on a secret meeting of pro-Iranian Shiite militia chiefs taking place at the Syrian army’s 91st Brigade HQ, outside al-Kiswah – 14km southwest of Damascus and 50km from the Golan. These militias, which have been fighting for Bashar Assad under Gen. Soleimani’s command, were being briefed by Iranian and Hizballah officers on their next offensive. This was Israel’s first attack on any of his forces.

YEMEN: On Saturday, Ali Abdullah Saleh, former president of Yemen, the mainstay of the Iranian-backed Houthi insurgency, announced he was “turning the page.” He was ready to ditch the Houthis and their backer, Iran – provided that the coalition (Saudi Arabia and the United Arab Emirates) lifted the blockade they had imposed on Yemen to cut off incoming Iranian weapons and halted its attacks. Saleh’s announcement sparked violent clashes between his followers and the Houthis.

DEBKAfile’s military sources recall that Yemen’s ex-president had long maintained ties with the CIA. His change of sides was timed to coincide with a fresh US-Saudi intelligence push to restore Saleh to the pro-Western Arab camp and topple pro-Iranian positions in Yemen and the Arabian Peninsula.

ISRAEL AND THE PALESTINIANS: The Trump administration is fed up with dodgy Palestinian tactics on peace negotiations. Egyptian President Abdel-Fatteh El-Sisi and Saudi Crown Prince Muhammad bin-Salman are likewise ready to wash their hands of the Palestinian Authority Chairman Mahmoud Abbas (Abu Mazen). US officials tried threatening to shut down the PLO office in Washington unless the Palestinians finally came to the table for peace talks and are now holding over Palestinian heads a possible decision – either to move the US embassy from Tel Aviv to Jerusalem or recognize the city as Israel’s capital.

To ward off these actions, all Abu Mazen needs to do is to pick up the phone to the White House, the royal palace in Riyadh and the presidential residence in Cairo and declare his willingness to cooperate with their initiatives to restart the peace process. But so far, Abbas is holding out, resorting instead to his outdated tactics: threatening that the entire Middle East will go up in flames and Palestinian terrorism will again raise its head if the Trump administration goes through with new decisions on Jerusalem.

By mid-week, the Trump administration should have reached a decision that indicates whether or not it has caved in under Palestinian threats. The next few days will also show whether the new US Middle East momentum is a flash in the pan or a fresh start to be continued.