International political changes and genuine refugee crises have prompted a renewed examination of UNRWA, the internationally funded mechanism for the Palestinians. 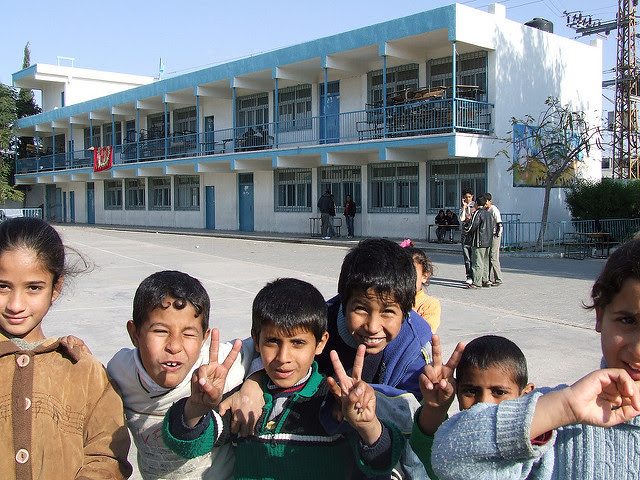 Kids at an UNRWA school in Gaza, photo via ISM Palestine Flickr CC

EXECUTIVE SUMMARY: International political changes and genuine refugee crises have prompted a renewed examination of UNRWA, the internationally funded mechanism for the Palestinians. The problem of transferring UNRWA’s health, welfare, and education responsibilities to other organizations is not easily resolved. Despite obvious problems (primarily the inevitable corruption), absorbing UNRWA into the PA is the least bad alternative, as it offers a path for both capacity-building and real oversight.

Three possibilities present themselves with regard to the future of UNRWA. First, its responsibilities can be shifted to the Palestinian Authority (PA). Second, they can be taken on by the United Nations High Commissioner for Refugees (UNHCR). Third, UNRWA can be kept intact.

Of these options, the PA offers the “best” alternative.

Why the PA? Part of the rationale is technical. For one thing, reassigning foreign aid to an internationally recognized, state-like entity creates – at least in theory – a higher level of capacity-building, where needs and resources can be more quickly and easily assessed and aligned. This is also, broadly speaking, in tune with democratic political processes. States respond not only to top-down, technocratically assessed issues but to bottom-up political pressure.

The PA would therefore be responsible for the Palestinians within its own territories as well as those who reside in other Arab states. It would be forced to act like a state and defend the rights and interests of its own citizens.

Externally, foreign aid to a state can also – in theory – be subject to more rigorous donor oversight. Unlike UNRWA’s internal assessments, which rarely find problems except in the allegedly inadequate scale of aid and programs, external review by donor countries would examine metrics and efficiencies, spot corruption, determine the success or failure of programs, and assess the overall level of need. External review is designed to encourage self-sufficiency, not dependency.

The problems with giving yet more aid to the PA are inescapable. First is the guarantee of corruption. Even more aid will enrich the entrenched kleptocracies and boost racketeering and patrimonialism, to the detriment of real programs and real needs. Effective programs will most certainly be destroyed in favor of ineffective or even nonexistent ones.

The cycle of official theft of aid, which results in pleas for more aid, accompanied by tales of pathos and threats of violence, will expand without question. So, too, will official incitement and the diversion of funds to bolster both international lawfare against Israel and actual terrorism.

But the possibility of oversight and the certainty of corruption also provide slender lines of political cover for fundamental change. By “normalizing” foreign aid to the PA in place of UNRWA, Western donors legitimize Palestinian “statehood” and also give themselves cover to pressure it by reducing or removing aid. Foreign aid is also subject to normal Western political pressures from constituencies in the donor countries both in favor and opposed. Human rights abuses (such as those that recently caused a reduction in aid to Myanmar) could finally have an impact on the PA.

In reality, foreign aid is almost the exclusive responsibility of diplomats and development specialists. They never declare problems solved, and – like their political masters – they thirst for “stability” that will keep the money flowing and the problems intact through the next appropriations cycle. But escaping the fetish regarding UNRWA is vital.

UNRWA is an iconic and sacrosanct entity. Without it, aid to the Palestinians would no longer be a sacralized demonstration of support for their narratives of displacement and return, or for the international system itself and for the UN. The Palestinian issue would be put into proportion while other needs and issues, like the genuine refugee crises in Syria and Yemen, would receive proper attention and resources.

Finally, by transferring responsibility, two cultural-political requirements would be addressed. First, a final status issue would be at least partially taken off the table: that of who bears responsibilities for Palestinian “refugees”. It is the PA. Even without formally repudiating the “right of return”, which UNRWA supports and the PA cannot at this point conceivably abandon, the issue would be incrementally quashed in theoretical and practical terms.

The PA’s taking responsibility, and the end of UNRWA, would also go a long way towards forcing Palestinians to give up the centrality of refugee-ness in their own culture. They are not refugees, much less internationally supported ones. They are a people with their own nascent state.

Why not assign UNRWA’s responsibilities to UNHCR? First, the Palestinian “refugee” issue is indeed a global fetish, not simply for the Palestinians and the Arab and Muslim world, but for the West, its interrelated academic, diplomatic, development, and philanthropic communities, and its left. Transferring the locus of that fetish from one UN organization to another – which is, in political terms, a near impossibility, given the ultimate responsibility of the United Nations General Assembly for UNRWA’s fate – would simply extend the radius of its already destructive influence.

The Palestinian “refugee” issue would simply take over and destroy another UN organization, one that does important work globally. Practically speaking, transferring UNRWA’s employees to UNHCR would guarantee that the latter organization would be taken over from within. The Palestinians’ predilections and needs would subsume those of real refugees. The playing field would be massively skewed, and the competition for resources would be brutal. Palestinians, accustomed to a perpetual flow of resources and political indulgences, would find themselves in competition with actual refugees with actual needs. They are unlikely to accept this, and the result would be the destruction of UNHCR from within.

Having two tiers of “refugees” with two overriding philosophies, one permanently institutionalized pending a magical restoration of the pre-1948 status quo, and the other situational, which helps refugees return when possible and resettle when not, is also a recipe for disaster. It is conceivable that real refugee populations would demand similar deals to the one the Palestinians achieved: permanent international maintenance and unlimited political support. Not only would Palestinian refugee culture be perpetuated, but it would be exported globally. The Palestinian issue would crush not only another UN organization but, more broadly, a global approach to refugees.

Are these problems in fact arguments for keeping UNRWA? It can be argued that UNRWA is the least bad solution. But stasis offers no possibility for change. UNRWA stands outside normal international politics and normal patterns of political oversight for international organizations. It deliberately prolongs and promotes Palestinian refugee culture, and transfers responsibility away from them and onto the international community. International leadership is historically helpless against the twinned Palestinian narratives of refugee pathos and the threats of violence. Political processes within the Palestinian community, internally within donor states, and within the international community as a whole are effectively short-circuited by these anomalies.

Traditionally, complaints about UNRWA are raised in the US Congress or elsewhere and addressed to UNRWA’s leaders, nominally international civil servants, who then promise investigations or change but more frequently complain bitterly about the temerity of oversight. Only financial pressures have gotten the attention of UNRWA’s leadership, which has woven its traditional tales of impending starvation and raised monies elsewhere while making cutbacks. Overall the leadership seems to have adopted the Palestinian mentality of steadfastness, digging in, and resisting change.

At present, any sort of change regarding UNRWA remains unlikely, if only given the political and expanding cultural divisions between Gaza and the West Bank. Gaza – which, minus UNRWA and its black markets, has a barely functioning economy – is a particularly vexing problem, albeit one that has been the subject of many development plans that posit enormous inputs of someone else’s money.

There is also no chance that the UN itself, much less UNRWA, would conceive of any changes. Fortunately, the Trump administration and the new Saudi regime of Muhammad bin Salman might, for the first time in seventy years, be willing and able to exert pressure on their own governments and allies to force change. Given the nadir where Palestinian politics are positioned and the PA’s standing in the Arab and Muslim worlds, and the vast needs of genuine refugees, perhaps there is some hope. Simply redirecting money from UNRWA to the PA would be an important step towards cutting the Gordian Knot.

Transferring UNRWA’s responsibilities to the PA is far from an ideal solution. In a way, it is a guaranteed recipe for an entirely new sort of chaos. But in a strategic sense, by forcing political and cultural changes, it would move matters forward. Planning is therefore essential to laying the groundwork.

Any shifts in UNRWA will be subject to myriad political, legal, bureaucratic, and practical problems. Which PA departments would assume UNRWA responsibilities for what? What oversight mechanisms must be put in place? Part of the problem all along has been that UNRWA, which is run both by and for Palestinians, is not subject to outside planning input (except from favored specialists), much less real international oversight. A transparent process of planning a transfer to the PA would necessarily require UNRWA to reveal who does what and how, and similar levels of transparency would be required from the PA. This seems unlikely at the moment, but could become a reality if both entities are faced with the possibility of draconian cuts.

Putting UNRWA within the normal sphere of global politics is also critical. Planning requires first understanding the interests and needs of stakeholders and their contradictory bureaucracies. In the Israeli context, while elements of the political echelon have expressed support for changes to UNRWA, the defense and security establishments have no interest in anything that could create uncertainty, much less backfire and increase their responsibilities. What mechanisms or guarantees could persuade the latter to support changes to UNRWA?

Similarly in the American context, the foreign policy establishment has long been bitterly opposed to any shifts regarding the Palestinians and has worked bureaucratically to thwart even minor changes. The defense establishment, by contrast, has tended to regard the Palestinian issue as something to be maintained in proportion to greater strategic threats.

But with new American leadership and a radically altered strategic landscape, the escalating threats of Iran and Russia locally and China and radical Islam globally, perhaps new arguments can be made regarding UNRWA that would shift entrenched attitudes. Certainly new leadership should be capable of forcing bureaucrats to execute new policies.

There is now a rare opportunity to change the global approach to the Palestinians and to help the cause of peace. Deep thought about the problem of UNRWA is long overdue, as are creative and daring solutions.

Dr. Alex Joffe is an archaeologist and historian. He is a Shillman-Ginsburg Fellow at the Middle East Forum.

UNRWA is a band aid for negligent bad actors for the Arabs trying to look like they're a representative organization. It is an addictive drug that has been used in Gaza, Lebanon, Jordan to no avail. Money is not used to properly educate; just to incite; its not used to build hospitals, instead to buy weapons; not for waste management, instead for Tunnels; not for water management, but for payments for attacks on Israel. Looking for some other organization to feed this drug addict is foolishness. Its time to apply the "cold turkey" treatment to the addict.