"Sharp power" is the  use of subversion, manipulation, distraction, and lies authoritarian to undermine an enemy. 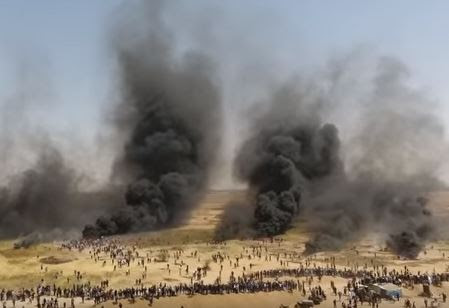 Screen shot of YouTube video of drone footage of March of Return,
near Khan Younis, April 6, 2018

EXECUTIVE SUMMARY: In the so-called “March of Return,” Hamas is utilizing a new kind of power in international relations called “sharp power.” This term originally referred to the subversion, manipulation, distraction, and lies authoritarian governments employ to undermine liberal democracies. The concept can now be applied to terrorist organizations like Hamas.

Democracies don’t know yet how to effectively cope with the challenges of “sharp power”. They do not understand how vulnerable they are, and are largely unable to prevent abuses of fundamental freedoms and human rights. Unfortunately, the Western media, including the major social media networks, as well as international organizations like the UN and its affiliated agencies along with human rights organizations (which are major tools of sharp power), collaborate with the Islamic dictatorship of Hamas in Gaza.

Power is the ability to influence others to get what you want. In the past, there was only “hard power”: getting what you want by using or threatening to use force or sanctions, or inducing compliance with rewards. When the Cold War ended, Harvard professor of Government Joseph Nye, Jr. coined the term “soft power”, defined as getting what you want by attracting and persuading peoples through values, policies, institutions, and culture.

The next step in the power theory evolution was “smart power”: a combination of hard and soft power where each reinforces the other. Social media inspired the creation of a new term, “collaborative power”: a bottom-up process of getting what you want by mobilizing and connecting global communities around a cause.

The Russian intervention in the US 2016 presidential elections and attempts to cultivate favorable public opinion in Europe via sophisticated information technologies and social media yielded the “sharp power” concept, the most recent innovation in definitions of power. In an article published in Foreign Affairs in November 2017, Christopher Walker and Jessica Ludwig distinguished between soft and sharp power. They described the latter as the influence wielded by authoritarian governments, primarily Russia and China, through initiatives in the spheres of media, academia, culture, and think tanks. They rejected the claim that what these governments do is a legitimate effort to “share alternative ideas” or “broaden the debate.” Sharp power “is not principally about attraction or even persuasion; instead, it centers on distraction and manipulation.”

The principal goal of sharp power isn’t a bona fide dialogue between rivals on international issues. It rather exploits and abuses freedom of expression, freedom of the press, and sensitivities to human rights abuses in order to undermine, subvert, and destabilize Western liberal democracies. People and organizations in authoritarian regimes, in official and non-official capacities, assume fake identities and disseminate lies to achieve their political goals. They especially target the media, international organizations, and human rights organizations. These despicable practices are frequently undertaken by authoritarian non-state actors, such as terrorist organizations.

Hamas systematically disseminated outright fabrications and distortions and manipulated innocent citizens and the Western and social media. They did this in order to increase tensions and disagreements in Israel, cultivate support in Western democracies, and obtain one-sided, extreme condemnation of Israel in international bodies such as the ridiculous and fraudulent UN Council on Human Rights.

Hamas presented the “March of Return” as an innocent and peaceful demonstration initiated by suffering citizens to protest their awful economic and social conditions. Hamas also accused Israel of committing war crimes by intentionally shooting and killing demonstrators. The truth is exactly the opposite, and Hamas’s claims are false and misleading.

The march was initiated and organized by Hamas, not by oppressed citizens. Hamas invested millions of dollars in building an infrastructure for the demonstrators, and called for the breaking of the border fence and infiltration into Israeli territory. If Hamas had been permitted to accomplish this goal, the life and property of Israeli citizens living a few meters from the fence would have been in danger. These were not peaceful demonstrations.

Hamas deployed operatives among the demonstrators and ordered them to throw firebombs, shoot at Israeli soldiers, put explosives on the fence, cross into Israel’s territory, and, if possible, kill or kidnap soldiers and citizens. They sent women and children close to the fence to provoke Israeli soldiers. They knew these violent actions might trigger Israeli fire, but that was the point. They wanted as many Palestinians as possible to be killed, including women and children, in order to obtain favorable media coverage, sympathy in world public opinion, denunciation from world leaders, and condemnatory resolutions from UN bodies. These are all clear manifestations of sharp power.

Hamas is lying and cheating about the reasons for the humanitarian crisis in Gaza. It annually spends hundreds of millions of dollars on operatives, rockets, attack tunnels, and violence. If Hamas had spent that money on economic and social development, Gazans would now live in a better economic environment. The more recent deterioration in the Gazan economy resulted from a bitter feud between Hamas and the Palestinian Authority, not from any Israeli action. The head of the Palestinian Authority, Mahmoud Abbas, was fed up with Hamas’s undermining of his authority, and cut funding for the power station and salaries of officials. These measures caused, respectively, electrical blackouts and severe reductions in income.

Hamas says it needs weapons because of the Israeli blockade and attacks on Gaza. Not true. In 2005, Israel completely withdrew from Gaza and expected a period of peace building. Israel imposed a partial siege on Gaza only because Hamas explicitly and repeatedly said it wished to destroy the Jewish state and constantly used terrorism and violence. The siege was the result of Hamas’s aggression and violence, not the other way around. Egypt, which also shares a border with Gaza, also imposed a siege on Gaza because of Hamas’s collaboration with the Muslim Brotherhood in Egypt and radical Islamic terrorist groups in Sinai.

The media in the US and Europe, including the elite press of The New York Times, The Washington Post, The Guardian, The Independent, CNN, and the BBC to name just a few, largely accepted the manipulations, lies, and fabrications of Hamas without much questioning or reservation. The headlines tell how the media almost unanimously framed the story. The New York Times published the following headline: “Israeli military kills 15 Palestinians in confrontations at Gaza Border.” Reuters wrote, “Israeli forces kill 16 Palestinians in Gaza border protests.” CNN announced, “Gaza protests: 17 Palestinians killed in confrontations with Israeli forces.” At best, these were misleading headlines.
The Western media also published and broadcast partial and biased reports, incorrect data and information, exaggerations, and extreme commentary. They also omitted significant contexts, which in itself caused distortion. For example, on several occasions, The New York Times published false statements like these: “The protests are aimed at Israel’s blockade of Gaza, which began after Hamas seized control in 2007.”

UN Secretary-General Antonio Guterres, EU foreign policy chief Federica Mogherini, and other leaders have called for an independent investigation of Israel’s conduct. At the Vatican, Pope Francis lamented the killing of “defenseless Palestinians.” In Israel, the radical left party Meretz and the controversial “human rights” organization B’etzelem, as well as similar bodies abroad, accepted the false Hamas narrative and demanded investigation only of Israel’s defensive actions.

The media, leaders, and organizations of the Western world, along with certain parties and organizations in Israel, conveniently removed any reference to Hamas’s motivation, aggression, war crimes, and manipulations. For them, it was only the Israeli Army versus innocent civilian demonstrators. These attitudes played right into the hands of Hamas, and strengthened its use of sharp power.

Hamas’s maximal and effective utilization of sharp power presents Israel with difficult dilemmas. If you use force against the terrorists implanted among the demonstrators, you might accidently hit innocent civilians. If you don’t, you endanger your soldiers and civilians who live close to the border, and you encourage further violence and attacks from Hamas.

In order to defeat Hamas’s sharp power Israel must use smart power, which can be defined as the minimal and careful use of force coupled with an intensive public diplomacy campaign. The campaign should present the true facts about Hamas, which are often ignored by the media, international organizations, and human rights organizations. Israel must effectively utilize all communication channels to disseminate the facts.

Critics of Israel’s handling of the demonstrators in Gaza missed, or willfully ignored, the march’s slogan: “the March of Return.” “Return” might seem an innocent, idealistic, and justified goal – the return of refugees to homes they left in Israel seventy years ago. In practice, “the right of return” means the destruction of Israel as an independent Jewish state. Hamas has never supported either a peace process with Israel or a “two states for two peoples” solution. “Return” means the death of Israel.

Gaza was a test case of Palestinian intention and ability to live in peace with Israel. In 2005, Israel dismantled all its settlements in Gaza and evacuated all the Jews who lived there and its entire military. The Israeli leaders who initiated and implemented the withdrawal promised that the disengagement, the newly acquired semi-independent status of Gaza, and the economic cooperation with Israel would pave the way towards a comprehensive Israeli-Palestinian peace and turn Gaza into Singapore of the Middle East. Many foreign leaders echoed these beliefs.

The result was exactly the opposite. Hamas turned Gaza into a terrorism base and frequently used force against Israeli civilians. Hamas has also become a proxy of Iran (after Hezbollah in Lebanon), a country that threatens to eliminate Israel.

Israel did in Gaza exactly what leaders, UN bodies, international organizations, and human rights organizations are telling it to do today in the West Bank. These demands ignore the real obstacles to peace. The Palestinians had an opportunity in Gaza to show how they can live in peace with Israel. They failed. Hamas preferred violence and sharp power to peace and reconciliation. This failure suggests that territory and settlements have never been the main obstacles to peace. There are much deeper reasons that the “March of Return” clearly exposes.

The Palestinians are not prepared to accept Israel as a Jewish state within any territory or borders. Ever since the recommendations of the 1937 British Royal Peel Commission, they have consistently rejected all territory-based partition solutions. They rejected the 1947 UN partition resolution and failed to establish a Palestinian state in the West Bank and Gaza when, between 1948 and 1967, those territories were respectively under Jordanian and Egyptian control. In 1999-2000, Arafat rejected two partition proposals offered to him first by Prime Minister Ehud Barak and subsequently by President Bill Clinton. In 2008, Abbas ignored a similar proposal offered to him by Prime Minister Ehud Olmert.

The insistence on the “right of return” and the refusal to recognize Israel as a Jewish state are demands to change the character and identity of Israel. No country can accept such demands. These have been the insurmountable obstacles to peace.

Given the natural sympathy for the underdog and the too easy acceptance of Hamas’s false narrative, defeating Hamas’s sharp power will be difficult. It necessitates an effective and wide-ranging public diplomacy campaign. This requires reorganization of the governmental ministries and agencies responsible for public diplomacy. The current government separated functions and resources among several ministries. Effective coordination and supervision among them is lacking. The smart power remedy requires a synergy among all the military, diplomatic, and communication systems as well as between the government and supportive non-profits and NGOs.

Prof. Eytan Gilboa is director of the Center for International Communication and a senior research associate at the Begin-Sadat Center for Strategic Studies.