The Images and Maps behind Iran's 'Land Bridge' - Seth Frantzman


Question remain about whether this land corridor is a corridor of influence, or one of weapons trafficking, or part of a wider permanent trade route that will combine Iranian-backed militias with alliances on the ground and a kind of highway of power stretching to Lebanon. 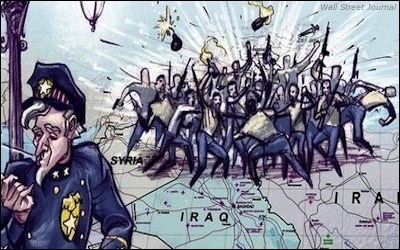 Airstrikes in Iraq between July 19 and August 20 are attempts to interdict Iran's "land bridge" that stretches across Iraq and Syria to Lebanon. This was the assessment published by ImageSat International on August 22. "The Iranian land bridge from Tehran to Syria and Lebanon is under attack in Iraq."
The history of Iran's land bridge go back many years. Allegations that Iran is constructing a swath of influence from Iran to Lebanon to link up with its Hezbollah ally, grew as Iran consolidated its influence in Iraq and Syria in the last decades. This was particularly true after the outbreak of the Syrian civil war and the rise of ISIS gave Iran's Islamic Revolutionary Guard Corps an excuse to intervene in Iraq and Syria. Working closely with Shi'ite paramilitaries in Iraq, the Syrian regime and Hezbollah, Iran's influence grew.

How to interpret that influence? One of the early reports to examine it as a "road to the sea" was Martin Chulov in October 2016. He argued that Iranian-backed Shi'ite militias in Iraq were using the war on ISIS to drive on of Iran's "most coveted projects, securing an arc of influence across Iraq and Syria." A map accompanying his article showed Iran's influence going through Baquba, Shirqat, Sinjar, Qamishli to Kobani and then Idlib, Homs and the sea. This was interesting because it showed areas under control of the Kurdish People's Protection Units (YPG), a group in Syria that was working with the US to fight Islamic State, as key to the route. In December 2016 an article at The Tower by Hanin Ghaddar called the bridge a part of Iran's attempt to control Syria, Iraq and Lebanon. 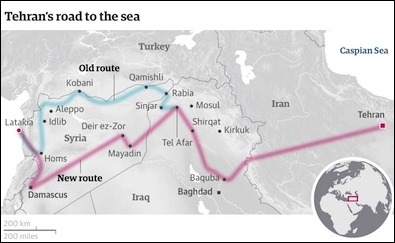 In May 2017 Chulov wrote that Iran had changed the course of its road to the Mediterranean coast "to avoid US forces." The new route would go through Tel Afar near Mosul and then to Mayadin and Deir ez-Zor in Syria before crossing the desert to Damascus and continuing to Latakia.

Iran's alleged project received an increasing spotlight in 2017 as the war on ISIS appeared to wind down. After Iraqi federal forces, backed by Shi'ite militias, retook Kirkuk and Sinjar from the autonomous Kurdistan Regional Government in October 2017, Iran seemed to gain more influence. An October 2017 article at Strategic Assessment by Franc Milburn analyzed possible routes of the land bridge. His report included a map showing three routes that Iran was using, one through Baghdad and then Syria's Tanf, another through Baghdad and Al-Qaim on the Syrian border and a third through Kirkuk and then northeast Syria.

Omar Al-Nidawi at The Washington Institute for Near East Studies argued that the land corridor was not as much of a concern as others were presenting it. He noted it had been in place for years and might not be Iran's main priority.

A November 2017 piece at The Jerusalem Post by Jonathan Spyer noted that "Iran puts finishing touches on its land bridge to the Golan." The article asserted that Shi'ite militias had crossed the border from Iraq to Syria to fight ISIS near Albukamal. A second November 2017 article by Hussein Ibish in The National also concluded that Iran's land bridge was moving "closer to reality."

As the war on ISIS continued in 2018 questions about Iran's goals remained. In July 2018 a group of pro-Assad fighters sought to threaten US-led coalition forces in Tanf. They were warned off with an airstrike. An article at Kurdistan24 said a "shadow" war was being fought against Iran's land bridge, and pointed to a mysterious June 2018 airstrike against a base of the Iraqi Shi'ite Kata'ib Hezbollah in Syria near the Iraqi border. The decision by US President Donald Trump in December 2018 to withdraw from Syria appeared to strengthen Iran's land bridge ambitions. 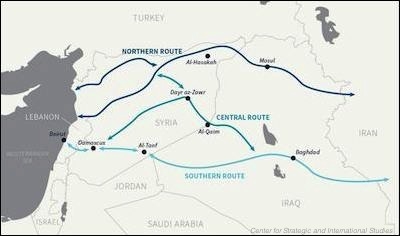 In March 2019 the Center for Strategic and International Studies published a study, "War by Proxy: Iran's Growing Footprint in the Middle East," by Seth Jones, with satellite images of an IRGC Quds Force base near Tehran and other aspects of the land bridge. This report looked at several possible routes, one in the north through eastern Syria and another in the south through Tanf. With US forces in both places, the Iranians had to go through the center at Al-Qaim and Albukamal on the Syria-Iraq border. This study also included an image of training facilities in Lebanon and alleged. Israeli air strikes in Syria.

In May 2019 an article at Al-Monitor by Joe Macaron asked if the Trump administration would seek to abort Iran's land bridge. This came amid rising Iran-US tensions.

The Foundation for Defense of Democracies looked closely at the land bridge in June 2019. David Adesnik, H.R McMaster and Behnam Ben Taleblu argued that the "concept of a land bridge has become integral to Washington's assessment of Tehran's strategic objectives." The study looked at the history of different routes of the corridor of influence Iran was constructing. "Disrupting the land bridge should be one important objective within a comprehensive strategy." 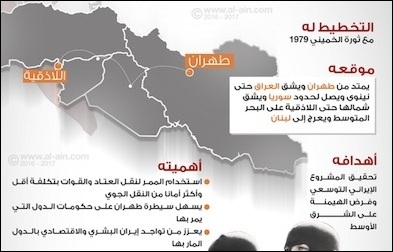 A subsequent map run by Al-Ain Arabic media also showed elements of Iran's corridor of influence. A map with an article run in mid-August showed Iran seeking a corridor through Baghdad and Syria. It also alleged Iran's influence in Nineveh Plains near Mosul was growing.

ImageSat International has done its own work on the land bridge. In June 2018 it published images and a map of "Iranian land bridge from Tehran to Syria and Lebanon. It showed a route through Baghdad that enters Syria either through Al-Qaim or Tanf and then goes through Damascus to Lebanon. It looked at attempts by Iraq and Syria to reconstruct the border crossing near Al-Qaim and Albukamal and the establishment of an Iraqi Shi'ite militia headquarters in Syria. 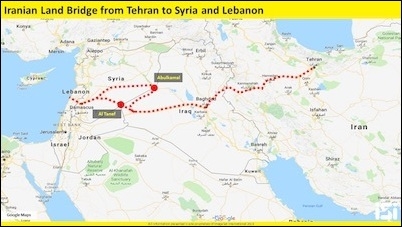 The report said there was a presence of Iranians and Shi'ites and that an "Iranian intelligence delegation" and elements of the Iranian-backed Popular Mobilization Units from Iraq had visited the area on June 30, 2018. Structures linked to the PMU had been destroyed in an airstrike on June 18, 2018.

In May 2019 new images from ImageSat International were published that showed Iran building a new crossing into Syria. The report, at Fox News, noted that the Iranian land bridge was being constructed and that Albukamal was essential to it. This appears to be the context of the ImageSat International satellite images published on August 22 after several airstrikes in Iraq. The New York Times has said some of the airstrikes were carried out by Israel. The ImageSat International images show Camp Falcon south of Baghdad, struck on August 12, Amerli north of Baghdad, struck on July 19, and a PMU base struck on August 20 near Balad. The map, the same as the one published in June 2018 by ImageSat, shows that the Land bridge is "under attack in Iraq."

The maps, images and reports paint a clear picture of Iran's emerging ambitions, but also show that the map of the road to the sea has changed a bit over time. The initial assertions of a northern and southern route have now generally been abandoned in favor of a more clear assessment of the central route, complete with images and evidence of infrastructure under construction. Question remain about whether this land corridor is a corridor of influence, or one of weapons trafficking, or part of a wider permanent trade route that will combine Iranian-backed militias with alliances on the ground and a kind of highway of power stretching to Lebanon. Whether several airstrikes will interdict it remains to be seen.

ALL EUROPEAN LIFE DIED IN AUSCHWITZ
by Sebastian Vilar Rodrigez

I walked down the street in Barcelona,
and suddenly discovered a terrible truth:

We killed six million Jews and
replaced them with 20 million Muslims.

In Auschwitz we burned a culture of thought, creativity and talent. We destroyed the chosen people, truly chosen, because they produced great and wonderful people who changed the world.

The contribution of this people is felt in all areas of life:
science, art, international trade, and above all, as the conscience of the world. These are the people we burned.

And under the pretense of tolerance, and because we wanted to prove to ourselves that we were cured of the disease of racism, we opened our gates to 20 million Muslims, who brought us stupidity and ignorance, religious extremism and lack of tolerance, crime and poverty, due to an unwillingness to work and support their families with pride.

They have turned our beautiful Spanish cities into the Third World, drowning in filth and crime.

Shut up in the apartments they receive free goods and services from the government.

They plan the murder and destruction of their naive hosts.

And thus, in our misery, we exchanged culture for fanatical hatred, creative skill for destructive skill, intelligence for backwardness and superstition.

We have exchanged the pursuit of peace of the Jews of Europe and their talent for hoping for a better future for their children, their determined clinging to life because life is holy, for those who pursue death, for people consumed by the desire for death for themselves and others, for our children and theirs.

What a terrible mistake was made by miserable Europe.