“[The PA] seizes power without holding democratic elections, rules over its people through dictatorship and abuses its opponents" 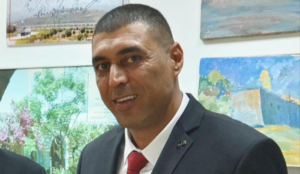 A Palestinian who was once a militant member of Fatah has had a change of heart and wants the Israeli government to stop giving money to the dictatorial and corrupt PA.

His extraordinary challenge to the PA is reported in the Jerusalem Post here:


Mohammad Aref Massad, a former Palestinian security prisoner, has demanded that Israel stop transferring tax-revenue funds to the Palestinian Authority on the pretext that the money is being used to fund terrorism and corruption.
Massad, who currently lives in Haifa, made his demand in an urgent petition he filed last week with the High Court of Justice against Prime Minister Benjamin Netanyahu, Finance Minister Moshe Kahlon and the Knesset Finance Committee.
The petition demanded that the funds be directly transferred to Palestinian workers and needy families.
Massad was born in a small village near Jenin and by the age of 13 had joined the ruling Fatah faction. At one point, he even became a member of Fatah’s armed gang, “Black Panther,” whose gunmen carried out numerous attacks against Israelis and Palestinians during the First Intifada. He was arrested by the IDF and spent more than seven years in prison.
In his petition, filed through lawyer Michael Litvak, Massad asked the court to order the Israeli government to explain why it won’t halt the transfer of tax-revenue funds — collected by Israel on behalf of the Palestinians — to the PA.
Massad told The Jerusalem Post he decided to file the petition out of concern for Palestinian workers in Israel and their families.
“These people are being deprived of the money,” he said. “We want the money to go directly to the workers and needy families. The Palestinian Authority government is very corrupt, and there is no reason why Israel should be transferring millions of dollars to this government.”
Massad said he wanted the court to order the Israeli authorities to explain why they won’t devise a mechanism to transfer the funds directly to Palestinians workers and merchants and their families.
“The PA is pocketing the funds and using them as it wishes in contravention of the law,” he said.
Massad, who describes himself as a political and community activist, said he represents tens of thousands of Palestinians “who fear for their lives once they are exposed for their activities against the Palestinian Authority.”

Massad himself is very brave. He may live in Haifa, but that is no guarantee of safety. There are plenty of PA loyalists in Israel proper and the West Bank who could permanently silence him if Mahmoud Abbas, or one of his cronies, gave the word. Massad has been pushed by his own outrage and frustration to publicly denounce the corruption in the PA. And he asks a good question of the Israeli government: why should the taxes you collect on behalf of the Palestinians be transferred to the PA, whose leaders steal what they want of those revenues, when those monies could be given directly to those he describes as “the workers and needy families”? Massad is petitioning the Israeli government to devise a way to make sure money goes to those for whom it is intended, and not to Abbas and his grasping cronies.

Furthermore, it is not only tax revenues that are being stolen by the PA big shots. They also help themselves to foreign aid money, and to wages earned by some Palestinians working in Israel that are paid to the PA.


The petition was filed to help Palestinians working in various fields in Israel, including construction, agriculture, industry and trade, he said.
Noting that the last Palestinian (parliamentary) election was held in January 2006, Massad said the PA government was an unelected and illegal government.
“It seizes power without holding democratic elections, rules over its people through dictatorship and abuses its opponents,” he said. “This is a corrupt government that does not care about its residents and passes on most of the funds to government officials and their supporters, as well as to corrupt people and terrorists.”

Of course the PA long ago gave up any pretense of democracy. It’s a dictatorship, though not of one man; Mahmoud Abbas shares his dictatorial powers with a handful of cronies, though he is primus inter pares, first among equals. They all have their hands in the government till, which contains various sources of funds: taxes collected by Israel for the PA and then transferred to it; the wages of some Palestinian workers in Israel; finally, the vast amounts of aid money donated to the Palestinians that never reach the people those funds are intended to help.

When Mahmoud Abbas stood for election in 2005 , he was running for a four-year term as president. But no other election has been held since, and he’s still in power, eleven years after his term was to end. And this is despite, too, the law that limits any president to two terms in office – that is, a total of eight years. He’s on his fifteenth year. That’s how things stand with the executive branch. As for the legislative branch of the PA, the Palestinian Legislative Council members are supposed to serve for four years, but none of them has had to run for office since first being elected in 2006. These are the Palestinian big shots, amassing fortunes from the aid money supplied to the PA. At the top of the list of the corrupt is Mahmoud Abbas himself, who, with his two sons Tareq and Nasser, has acquired a fortune of more than $400 million. One reason for Abbas clinging to office is that he wants to amass more money while he still can. He is well aware that two Hamas leaders in Gaza, Khaled Meshaal and Mousa Ibn Marzouk, each amassed fortunes of at least $2.5 billion. This naturally rankles; Abbas feels he has some catching up to do. It’s not fair that he should leave office with only a paltry $400 million. After all, his predecessor Yassir Arafat managed to acquire, according to estimates, three billion dollars during his time as head of the PLO. Why shouldn’t Abbas be in the same league?


The PA has for many years been “undemocratically controlling its people by force and without elections, and therefore, the agreements signed by the Palestinians and Israel — and which resulted in the creation of the PA — are no longer relevant. It is not an elected government, and there is no obligation to transfer the funds to it,” Massad said.

It’s good to have a Palestinian tell the truth about the PA. You might ignore what Israelis say, but a Palestinian Arab, and one who was once a member of Fatah’s “Black Panthers” to boot, cannot be similarly dismissed. The rage with the PA that Massad expresses is, we know from opinion polls (where the respondents are anonymous), widespread among Palestinians in the West Bank. They are understandably fearful; Mohammed Aref Massad, who appears to believe he’s no longer got anything to lose, is not.

It would be nice to think that this brave man’s cri de coeur and his petition will get wide attention in the Western media. But I doubt it will. He’ll be vilified by the PA as “a Zionist agent.” The Israelis tolerate the PA, up to a point, because it’s less violent than its rival, Hamas, and it cooperates on some security matters, especially when those matters involve helping Israelis foil, or find, Hamas terrorists. They likely won’t act, therefore, on Massad’s petition. But the Israeli media will give Massad that attention, and so will the media in Saudi Arabia, the UAE, and Egypt, all of which have their own reasons for wanting to expose the PA leaders for the grasping crooks they are. Mohammad Aref Massad, once violently anti-Israel, has recognized the unappetizing truth about the PA, and having endured so much (including seven years in an Israeli jail, which may have been the least of his travails) is not about to shut up. Other Palestinians may emulate his bravery. Only good can come of this.