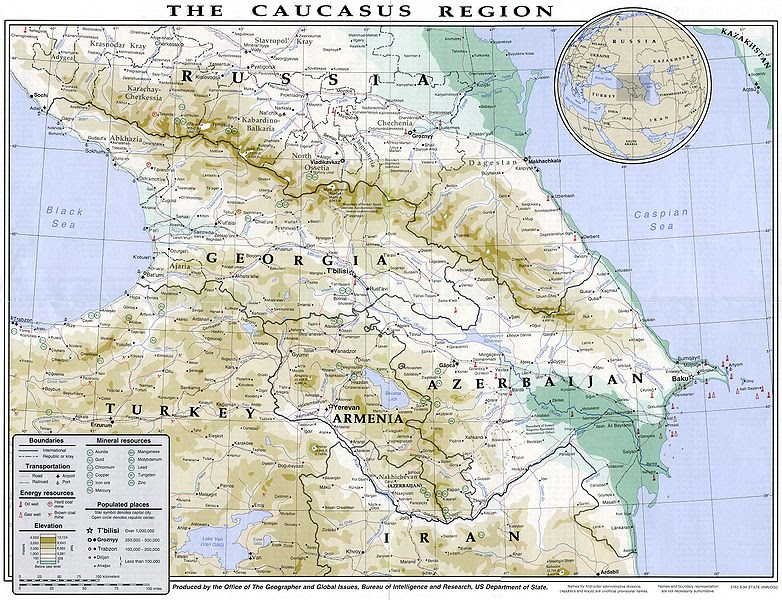 
EXECUTIVE SUMMARY: One might be excused for believing the South Caucasus to be of little interest to Israel, as it does not border the Jewish state and hosts several intractable conflicts. But Israel has unique interests in each of the three component South Caucasus countries – interests that have only grown as Iran’s influence has expanded following the lifting of sanctions in 2016.

For most observers, the South Caucasus region might not appear high on Israel’s foreign policy agenda. This is a reasonable assumption, as none of the three states – Azerbaijan, Armenia, and Georgia – borders Israel. Moreover, the region is a hotbed of ethnic fighting, with three ongoing separatist conflicts in South Ossetia, Abkhazia and Nagorno-Karabakh further complicating political stability. However, the South Caucasus’ strategic location, which lies on the one hand between Central Asia and eastern Europe, and on the other between Russia and the Middle East – has drawn regional players to seek greater influence in the territory. Those players are usually Turkey, Russia, and the EU, and their interest might logically appear to overwhelm any potential influence Israel might have in the region.

Yet over the past year, Israel has intensified its foreign policy moves towards each of the South Caucasian states. Each country interests Israel for its own particular reasons. For example, prior to 2008, the Georgian army was largely supplied with Israeli military technologies. However, the Russo-Georgian war that broke out in August 2008 caused Israeli exports to cease, as Russia was angry that its small neighbor was able to boast such advanced military capabilities.

Beyond military ties, Georgia interests Israel from an economic standpoint: Israeli investments play an important role in Georgia’s economy. Moreover, Georgia is geopolitically important, insofar as it has several large ports on its Black Sea shoreline that can easily be used for commercial and military purposes.

In the case of Armenia, Israel’s relations have been somewhat distant for more than a decade. This was due primarily to Israel’s rather strong ties with Yerevan’s two biggest geopolitical rivals, Azerbaijan and Turkey. However, a shift in bilateral relations was made apparent recently when a senior Israeli official visited Yerevan. Tzachi Hanegbi, Israel’s Minister for Regional Cooperation, visited Armenia on July 25-26, 2017 for talks with senior Armenian officials. Hanegbi is a key figure in Prime Minister Benjamin Netanyahu’s ruling Likud party and has held ministerial positions for two decades. He said his visit was intended as a step forward in relations to make the Armenia-Israeli “friendship mutually beneficial in many fields.” His was the first visit by a senior Israeli official to Armenia since 2012.

One of the major bones of contention between Armenia and Israel is Israeli arms shipments to Azerbaijan. Those supplies played an important role in last year’s “April war” between Armenia and Azerbaijan. After Azerbaijan took several frontline posts in a surprise attack on April 2, 2016, Armenian forces undertook a counteroffensive – but Israeli-supplied Harop suicide drones and Spike anti-tank missiles helped Azerbaijani forces thwart that counterattack.

This brings us to Israel-Azerbaijan relations. In late 2016, reports circulated that Baku was planning to buy Israeli “Iron Dome” capabilities to better counter Armenian attacks. Beyond those military ties, Azerbaijan is important to Israel for its large oil resources. In the event of need, the country could potentially become Israel’s major oil supplier.

Thus Israel’s relations with each of the three South Caucasian states depends on specific economic and military interests – interests that are contained within a complex wider context. Each state has its own relations with its larger neighbors, Russia and Turkey. Israeli diplomacy must navigate difficult political terrain where a misstep could cause Israel’s ties with Turkey or Russia to deteriorate.

With that in mind, there is another likely reason why Israel’s diplomacy in regard to the South Caucasus has become more active over the past year or so.  That reason is Iran.

Historically, from the Achaemenids to the Sasanians in the ancient period and through the seventeenth and eighteenth centuries, Iran, under various dynasties, has aspired to a major role in the South Caucasus. When, after the Cold War, sanctions were placed on Tehran’s nuclear program, Iran was constrained in the expansion of its role in this region.

However, sanctions were officially lifted in 2016. The Trump administration, while pressuring Tehran, seems unlikely to change course in the near future towards a re-imposition of sanctions. Iran’s role in the region is thus set to increase. Although Russia and Turkey will continue to exert major military and economic power in the South Caucasus, developments suggest that Iran is increasing its economic clout.

Iranian officials often meet their Georgian counterparts to discuss trade corridors. For example, on June 6, the heads of the Georgian, Iranian, and Azerbaijani railways discussed launching a new South-West Transport Corridor where Georgia could play a vital transit role connecting the Persian Gulf and India to Europe.

Tehran has also often expressed its willingness to use the Trans-Anatolian Gas Pipeline and the Trans-Adriatic Pipeline, and intends to increase trade with the South Caucasus countries. It has stated on several occasions that trade with Georgia, Armenia, and Azerbaijan will grow from approximately $1 billion to more than $2.5 billion.

Iran has taken steps to establish itself on the Black Sea coast. In late 2016, it was agreed that Iran and Georgia will construct, through a joint venture, various oil reproduction facilities near Georgia’s Black Sea town of Supsa, on approximately 1.2 square kilometers of land. Tehran and Yerevan have also held talks on the possibility of constructing a $3.7 billion railway through Armenia to Georgia’s Black Sea coast.

Another area of involvement for Iran could be the simmering Nagorno-Karabakh conflict. In the early 1990s, there were unsuccessful attempts by the Iranian government to mediate it. Since both Armenia and Azerbaijan border Iran, it is natural that Tehran seeks to play a bigger role in the settlement of this conflict.

In the case of Azerbaijan, Iran wants to involve it in a common economic corridor together with Russia and also limit Israel’s cooperation with Baku. Tehran has often accused Azerbaijan of allowing the Israeli military to use its territory to observe Iran’s actions.

Thus, it can be argued that Israel’s foreign policy is diversified towards the South Caucasus states. Moreover, in the last year or so, Israel has expanded its diplomatic activities in the region to coincide with Iran’s stepped-up efforts towards Georgia, Azerbaijan, and Armenia.