CAIR Rep: Violence Shows It's America That Needs to Change 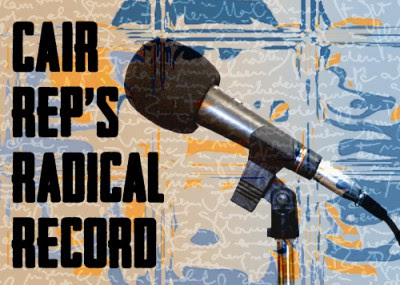 Anti-American violence throughout the Muslim world, ostensibly over a cheap Internet film denigrating the Muslim prophet Muhammad, may be misguided, but it's a result of "the lack of dignity, the lack of respect that they're being shown." And it's up to America to change policies to calm things.

That's the message a Council on American-Islamic Relations (CAIR) official brought to a television interview Sunday.

And that's not the worst thing about Cyrus McGoldrick's comments.

McGoldrick's interview was on Press TV, an Iranian government-controlled English-language news outlet. He never condemned the violence outright, saying "We're very sensitive to the loss of life" and "people's lives are always to be mourned." The angry mobs show "no real understanding of nuance" because the American government neither financed the film nor had anything to do with its distribution.

Few protestors likely even saw the video, said McGoldrick, civil rights director for CAIR's New York chapter. "And I don't think it's about the film at all, really, I think that people are tired. People have had enough of what is seen by them, what looks to them like America's war on Islam. And this is one of the symptoms of that."

That "war on Islam" narrative is acknowledged to be among the most effective messages in radicalizing Muslims. Even the White House acknowledges this. In the past week, a federal judge sentenced a 29-year-old to 30 years in prison after he plotted to detonate a suicide bomb inside the United States Capitol and arrested an 18-year-old in Chicago who thought he was detonating a car bomb outside a bar.

Both Amine El-Khalifi and Adel Daoud thought America was waging war on Islam.

McGoldrick could have told his Iranian network interviewer that such a perception is not only wrong, but dangerous. He could have pointed out that Muslims in America, especially Shia, are freer to practice their faith than in most Sunni Muslim nations.

But he didn't. Instead, he raised doubt over the most fundamental American freedom.

The recent violence, including the attack on the American Consulate in Benghazi, Libya which killed Ambassador Chris Stevens and three other Americans, might have be seen as "the straw that broke the camel's back in terms of Muslims' patience with American and Western intervention," McGoldrick said.

That puts the onus on the United States "to very critically think about how much more weight will we put on the Muslim world? How many more attacks? How many more drone strikes? How many more coups … until we realize that we need to take a principled stand, and a just stand, to make sure that we respect human rights, sovereignty and dignity all over the world."

McGoldrick is among a number of CAIR officials who routinely appear on Press TV, usually to denigrate American politics or policy.

But McGoldrick's affinity with the Iranian regime runs deeper. He promoted the August 17 "al-Quds Day" rally in New York, advertising and marketing virulent anti-Israel rhetoric at the Iranian-inspired event.

Quds Day is a creation of the Iranian Ayatollah Khomeini and a frequent vehicle for Iranian President Mahmoud Ahmadinejad to call for Israel's elimination and to publicly delegitimize the West. Its organizers have adapted resolutions that endorse Hamas, and dismiss Palestinian terrorism as simple "side issues." 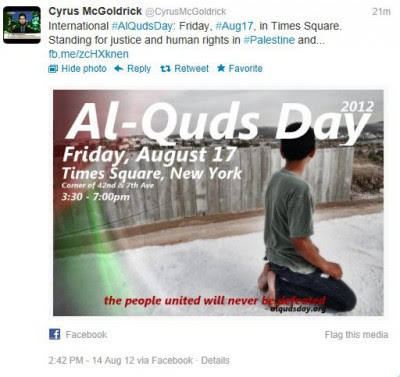 Claims of Jewish control of the media and American politics, and alleged war-mongering by Israel and America radiated prominently this year through similar rallies held in Washington D.C., Chicago and Detroit.

McGoldrick, of Iranian and Irish heritage, touted similar rhetoric at the New York rally, denying that he is anti-Semitic but boasting he "most definitely" is anti-Zionist. He accused Israel of theft and murder, and instructed the "oppressed" to stand up to the "oppressor."

McGoldrick's statements were not unique to al-Quds Day. In a Twitter post last month, he blasted the New York Police Department for being "Thuggish, criminal, violent, abusive, even genocidal. This is the #NYPD. How many more have to die?"

He spoke at the 2011 Quds Day rally, too, where he also mocked the NYPD and boasted that Quds Day had become "a powerful event." During a spoken word performance, he smiled as he said he's "just out here to Islamicize America, 'Cause more peace shouldn't make them so hysterical."

It's a line he used again in greater detail during a March appearance at the New York Institute of Technology.

In a program entitled "The Muslim American Identity," McGoldrick said America can be more peaceful and decent if it is more Islamic.

"We should not reinforce this distinction or between Islam and the West, as if they're mutually exclusive. We need to make sure that – oh, the camera's gonna love this one – we need to Islamicize America … That's, but you gotta say it with a smile on. You can't just be like – I'm here to Islamicize, you have to – I'm here to Islamicize America you know. There's nothing wrong with that. You know and that shouldn't scare anybody. I'm not forcing any rules on people. Islam is a mercy to us to improve ourselves. You know so if we're working, an Islamic society is a decent society, you know and you're not compelling anybody to do anything, just lead by example, that's all."

In the same speech, McGoldrick lamented the convictions of two Muslims who worked to aid al-Qaida during an appearance at the New York Institute of Technology. Aafia Siddiqui was convicted of attempting to murder Americans who detained her in Afghanistan, while Tarek Mehanna was convicted of conspiracy to provide material, conspiracy to commit murder in a foreign country, and making false statements to law enforcement. He went to Yemen in 2004 hoping to be trained at a terrorist camp with the goal of plotting jihad against American troops stationed in Iraq. When that didn't work, he came back to the United States and launched his own online al-Qaida "media wing" to translate and distribute publications by the terrorist group.

To McGoldrick, these cases prove that the government is out to get Muslims for thought crimes.

"This is, it's like 'Minority Report' on crack. Like we have two cases, you know Tarek Mehanna up in Boston, we have Aafia Siddiqui in New York, who these people were convicted with no physical evidence of a crime whatsoever. The prosecution didn't even bother. They basically made the case – well these people don't like America, so oogie oogie boogie, and jury gave them like, they jury gave them 86 years to Dr. Aafia, and Tarek Mehanna he convicted I think, I'm not sure if he's been sentenced yet, but it's not gonna be a few months. The, it's amazing, you know the level of thought now has been criminalized. And that's what it comes down to – thought."

Last month, McGoldrick linked to a 1991 video from his Twitter account showing Siddiqui as a school girl. "Can't watch this without tearing up," he wrote. "May God free our sister Aafia."

CAIR-NY encouraged its followers through a Twitter post to support Siddiqui at her appeal last February. McGoldrick personally and publically offered Siddiqui his prayers.

As he showed on Press TV, McGoldrick also possesses a knack for peddling propaganda that America is engaged in a "War on Islam." In January, McGoldrick told the Queens Chronicle that a wave of arson attacks by a lone suspect on mosques was driven by racism, even though police determined personal vendettas were in play. In one case, a mosque had refused to let the suspect use its restroom. McGoldrick capitalized on the moment.

"It was only a matter of time before the war abroad became a war at home," McGoldrick said. "Fearmongering about Islam and other American minorities have ripped this country apart. Warmongering politicians and willing media confirm this narrative, the warrantless incomprehensive surveillance of the Muslim community by the NYPD confirms this narrative and the destruction of the Constitution in the name of the war on terror confirms this narrative."

McGoldrick also advocated for the Muslim Brotherhood political ascension in Egypt, blaming Israel for any effort by the military to prevent that result.

"My heart is with Egypt after yesterday's military coup," McGoldrick wrote in a Twitter post. "May Allah protect the revolution & people from the military doing Israel's bidding."

McGoldrick joined CAIR-NY in December 2010 and has a robust history of incendiary statements since, including his comments on an Iranian network.

Because CAIR employs McGoldrick, it is accountable for his actions and incendiary statements. Government agencies and elected officials should take note that CAIR does nothing to rein in young extremists like McGoldrick, who promote Iranian-inspired hate rallies and make false statements about law enforcement.

But most of McGoldrick's rhetoric falls neatly in line with that asserted by his CAIR bosses. That's something the State Department should consider the next time it taps a CAIR official for travel abroad, or as a dialogue partner. The FBI has found CAIR is not "an appropriate liaison partner." McGoldrick's actions only reinforce the reasons why.