PA: "The Western Wall... no person besides Muslims ever used it as a place of worship, throughout all of history"


The Palestinian Authority Minister of Religious Affairs, Mahmoud Al-Habbash, said recently that all of Jerusalem and the Western Wall are "the sole right of Palestinians." To back this up, he falsely claimed that "no person besides Muslims ever used it [the Western Wall] as a place of worship, throughout all of history, until the ominous Balfour Declaration was issued in 1917." This denial of the Jewish nation's history by the PA minister came in response to a statement by Israeli Prime Minister Benjamin Netanyahu about Israel's 3,000 year history in Jerusalem, as he lit the eighth candle of the Chanukah holiday last month at the Western Wall. The PA minister said Netanyahu's statements were "nothing but nonsense and an attempt to manipulate both history and geography, and are worthless from a religious, historical, or legal point of view." His statements were reported by WAFA, the official PA news agency. 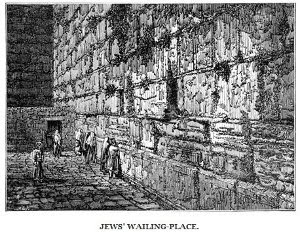 Palestinian Media Watch has documented that this ongoing PA denial of Jewish history in Israel and especially Jerusalem is a fundamental component of the PA's political program to deny Israel's right to exist. (See below.)

The following is the PA minister's statement denying a Jewish connection to the Western Wall:

"Minister for Religious Affairs Mahmoud Al-Habbash said that Jerusalem and all its features, its geography, and its Islamic and Christian holy sites, and this includes the Western Wall, are the sole right of Palestinians. (The Arabic throughout the text for the Western Wall is Al-Buraq Wall - Ed.) In a press release he stressed that [Israeli Prime Minister] Netanyahu's recent statements concerning the occupation's (i.e., Israel's) ownership of the Western Wall are nothing but nonsense and an attempt to manipulate both history and geography, and are worthless from a religious, historical, or legal point of view. (See Netanyahu's exact quote below - Ed.) Al-Habbash made clear that Netanyahu's statements about Jerusalem and the Western Wall lack the elementary scientific basis for approaching history which has always proven Islamic ownership of the Western Wall... that no person besides Muslims ever used it as a place of worship, throughout all of history, until the ominous Balfour Declaration was issued in 1917."
[WAFA, official PA news agency, Dec. 17, 2012,
Al-Hayat Al-Jadida, Dec. 18, 2012]

The following is the statement by PM Netanyahu at the Western Wall, as he lit the eighth candle of Chanukah, which prompted the PA minister's statement:
"In recent days, I have heard that the Palestinians are saying that the Western Wall is occupied territory. I want to tell them from the closest possible place to the miracle of the jar of oil: The Western Wall has been ours for 3,000 years, and it and the State of Israel will be ours forever."
[Israeli Prime Minister's website, pmo.gov.il , accessed Dec. 27, 2012]
http://www.pmo.gov.il/English/MediaCenter/Events/Pages/eventwall151212.aspx

Below are excerpts from Abraham Lincoln's Secretary of State William H. Seward's book Travels Around the World describing Jewish worship at the Western Wall in Jerusalem. (Cited at http://lennybendavid.com/2012/08/president-lincolns-secretary-of-state.html)

"June 13, 1871... Jerusalem is now divided according to its different classes of population. The Mohammedans are four thousand, and occupy the northeast quarter, including the whole area of the Mosque of Omar. The Jews are eight thousand, and have the southeast quarter... The Armenians number eighteen hundred, and have the southwest quarter; and the other Christians, amounting to twenty-two hundred, have the northwest quarter...
The Jewish Sabbath being on Saturday, and beginning at sunset on Friday, the weekly wail of the Jews under the wall takes place on Friday, and is a preparation for the rest and worship of the day which they are commanded to "keep holy." The small rectangular oblong area, without roof or canopy, (i.e., the Western Wall) serves for the gathering of the whole remnant of the Jewish nation in Jerusalem. Here, whether it rains or shines, they come together at an early hour, old and young, men, women, and little children--the poor and the rich, in their best costumes, discordant as the diverse nations from which they come. They are attended by their rabbis, each bringing the carefully-preserved and elaborately-bound text of the book of the Lamentations of Jeremiah, either in their respective languages, or in the original Hebrew. For many hours they pour forth their complaints, reading and reciting the poetic language of the prophet, beating their hands against the wall, and bathing the stones with their kisses and tears. It is no mere formal ceremony. During the several hours while we were spectators of it, there was not one act of irreverence or indifference. Only those who have seen the solemn prayer-meeting of a religious revival, held by some evangelical denomination at home, can have a true idea of the solemnity and depth of the profound grief and pious feeling exhibited by this strange assembly on so strange an occasion, although no ritual in the Catholic, Greek, or Episcopal Church is conducted with more solemnity and propriety."
[Travels Around the World, William H. Seward, quoted at
http://lennybendavid.com/2012/08/president-lincolns-secretary-of-state.html
Also read Seward's description of his visit to the Hurva Synagogue]

The PA's denial of Jewish history in Israel is an integral part of the PA's political program. This denial is used as the basis for the PA's denial of Israel's right to exist. This was expressed explicitly in a recent article by a PA daily columnist who argued that Zionists have no connection to the Biblical Hebrews and therefore Israel has "no historical or legal basis" to exist:
"The Zionist movement's leaders and their broad group of followers have no relation even to the [Biblical] twelve tribes of Israel, as the great Hungarian historian [Arthur] Koestler proved, and as Jewish and Israeli researchers clarified later. This means that the superfluous [nation] in this region, and the one harming its security and stability, is the occupation (i.e., Israel) in all its shapes and stages, whether in the past or in the present, and whether in the form of military occupation, settlement, or fabricating Judaization that have no historical or legal basis."
[Op-ed official PA daily, Al-Hayat Al-Jadida, Dec. 15, 2012]

In keeping with this policy, PA TV broadcast a documentary in 2010 and 2011 that described Jews praying at the Western Wall as " sin and filth."

Click to see more examples of PA denial of Jewish history in Jerusalem.