Official: Palestinian Bid to Haul Israel before Court would 'Suck Air' out of Peace Process


Tal Becker, the Foreign Ministry's deputy legal adviser, said the challenge of the Palestinians joining the ICC and then taking Israel before the court is “potentially very significant.” 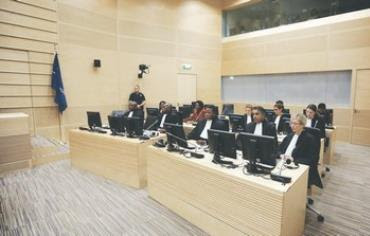 If the Palestinians take Israel to the International Criminal Court it would fundamentally alter the relationship with Jerusalem and likely “suck the air” out of the diplomatic process, the Foreign Ministry’s deputy legal adviser said Monday.

Tal Becker, speaking at the annual meeting in Jerusalem of the Conference of Presidents of Major American Jewish Organizations, said the challenge of the Palestinians joining the ICC and then taking Israel before the court is “potentially very significant.”

“One of the main problems with the ICC is the attempt to put Israel in the chair of the accused,” he said, adding that this would give a huge boost to the de-legitimizers and the Boycott and Divestment (BDS) movement. Becker is considered a confidant of Justice Minister Tzipi Livni, and was closely involved with her in the negotiations with the Palestinians that followed the Annapolis Conference in 2007.

“The risk of criminal process would fundamentally alter the relationship and suck the air out of the political process,” he said. “No Israeli government would engage in the process with that threat over its head.”

One of the dangers of the Palestinians seeking admission to the ICC, he said, was that terrorists would attempt to draw IDF soldiers into “impossible” situations, and then take them to the ICC.

Regarding the threat of boycotts, Becker said that the boycott and divestment movement presents Israel with the challenge of not giving it too much significance, while at the same time not being dismissive of it. There is no better gift to someone engaged in the BDS efforts than to describe it as a “great threat” facing Israel, he said.

Yossi Kuperwasser, the director-general of the Intelligence Ministry, said that the boycott efforts were part of the actions by “a formidable group of organizations” who aim to weaken Israel’s ability to defend itself by weakening its legitimacy in international fora. His ministry is involved in drawing up plans to combat these efforts.

“Israel is not going to change policies on the peace process because of threats of economic pressures,” Kuperwasser said. “If the purpose of establishing Israel was to have a prosperous economy, we would not have come here. We came here because this is our ancestral homeland.”

Kuperwasser said he did not expect “significant economic pressure” from the European Union or individual states at a structural level, but would rather face sporadic “events” from various institutions.

Kuperwasser, who has been active in Israel’s campaign to get support for its demand that the Palestinians recognize Israel as the Jewish state, said that while it was difficult to convince the US of this at first, “they have adopted the idea and now understand that it is very critical.”

Copyright - Original materials copyright (c) by the authors.
Posted by Sally Zahav at 2:18 AM