Knesset is set this week to discuss a proposal to place the Temple Mount under Israeli sovereignty; Hamas official criticizes Fatah minister for saying Jews could visit Western Wall under future Palestinian state. 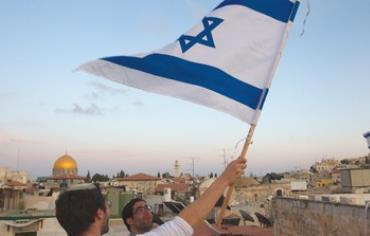 A JEWISH man waves a flag with the Temple Mount in the background.
Photo: REUTERS

The Palestinian Authority and Hamas warned Sunday of Israeli “plans” to impose Israeli sovereignty on the Aqsa Mosque in Jerusalem.

PA Minister for Religious Affairs Mahmoud al-Habbash said that there would be no sovereignty over the Aqsa Mosque and Islamic and Christian holy sites other than Palestinian sovereignty. “This is the full right of the Arab, including Muslims and Christians,” he said.

Al-Habbash claimed that Israel has plans to “divide” the Aqsa Mosque. “These efforts won’t succeed,” he added.

He was referring to routine visits by Jews to the Temple Mount and calls by some Israelis to impose Israeli sovereignty over the compound.

The PA minister said that only Muslims were entitled to pray at the holy site.

The Knesset is set to hold a plenary discussion on Tuesday to discuss a proposal by MK Moshe Feiglin (Likud) to place the Temple Mount under Israeli supervision.

Another top PA official was quoted as warning Israel against the consequences of “desecrating the holy sites in Jerusalem.” Israel, he charged, is “playing with fire.”


In the Gaza Strip, Hamas representative Yunis al-Astal accused Israel of plotting to “destroy” the Aqsa mosque in order to build the Third Temple.

The Hamas official criticized the PA minister al-Habbash for saying that Jews would be permitted to visit the Western Wall after an Israeli withdrawal from east Jerusalem.

Copyright - Original materials copyright (c) by the authors.
Posted by Sally Zahav at 2:15 AM