The Russian Ministry of Defense claims that the US aircraft was heading toward the Khmeimim Air Base in Latakia, Syria where Russian troops and equipment are stationed


Russian pilots intercepted a US Navy aircraft in an "unsafe and unprofessional manner" on Sunday for the second time within four days, claimed the US Naval Forces Sixth Fleet.


A US Navy P-8A Maritime Patrol and Reconnaissance Aircraft in the Sixth Fleet was flying in international airspace over the Mediterranean Sea when it was intercepted twice by a Russian SU-35 within two hours. 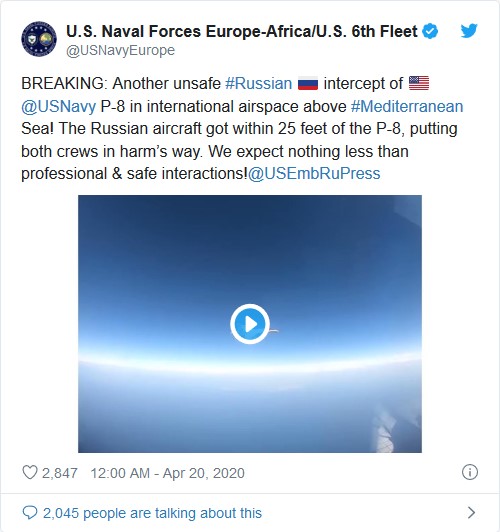 The first intercept was considered safe and professional, according to the Navy statement, but the second intercept was determined to be unsafe and unprofessional due to a high-speed, high-powered maneuver by the Russian aircraft that brought the two aircraft within 25 feet of each other with the SU-35 directly in front of the US Naval aircraft. The maneuver exposed the US aircraft to wake turbulence and jet exhaust, according to the US Navy.
"The unnecessary actions of the Russian SU-35 pilot were inconsistent with good airmanship and international flight rules, seriously jeopardizing the safety of flight of both aircraft," stated the Sixth Fleet.
On Wednesday, a Russian SU-35 flew inverted within 25 feet of a US P8-A over the same waters. In both cases, the US aircraft were operating consistent with international law and didn't provoke the activity, according to the US Navy.
The Russian Ministry of Defense responded to the incident on Sunday, claiming that the US aircraft was heading toward the Khmeimim Air Base in Latakia, Syria, where Russian troops, aircraft and S-400 air defense systems are stationed, according to the Russian Sputnik News.
"After approaching the aircraft, the pilot of the Russian fighter identified the plane's tail number and its status as an aircraft of the US Navy, and took it under escort," said the ministry of defense, adding that the aircraft then changed course, allowing the Russian aircraft to return to the airfield.Shortly after an Israeli airstrike near Latakia in 2018, a Russian jet was downed by Syrian anti-aircraft fire.
Several aircraft tracking sites said the incident on Sunday between the Russian and American aircraft took place near the Syrian coast, according to Radio Free Europe/Radio Liberty.
Testy encounters between American and Russian forces are not a rare occurrence, both in the air and on land.
In December, Russian and American troops brawled in Tell Tamer in northeast Syria. Russian forces were present in the area at the same time as US troops and when the two parties met it devolved into a fist fight, "due to their presence in the same area," according to the Syrian Observatory for Human Rights.
Russia has fought alongside the Assad regime and Iran in the Syrian Civil War since 2015, along with more recent clashes with Turkey, a NATO member state.