Israeli decision-making has always been driven by the active defense ethos, and this is reflected in Israeli filmmaking and TV-making. 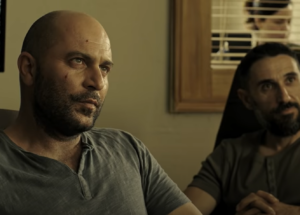 EXECUTIVE SUMMARY: Strategically, Israel’s fundamental military premise is defensive but its tactics are offensive—a result of its geography and absence of territorial depth. Israeli decision-making has always been driven by the active defense ethos, and this is reflected in Israeli filmmaking and TV-making.

The Israeli concept of “active defense” has long been used by the film industry as a tool with which to showcase the Israeli perspective on the Arab-Israeli conflict. Col. David “Mickey” Marcus, as portrayed in the film Cast a Giant Shadow by Kirk Douglas, is given the line, “The olive branch hasn’t worked around here since Noah ran the ark into a mountain.” The iconic character Ari Ben Canaan in the film Exodus, portrayed by Paul Newman, expressed the same idea: “Each person on board this ship is a soldier. The only weapon we have to fight with is our willingness to die.”

Generations of American Jews were raised on these images and messages. They personalized the conflict and stoked the collective emotional attachment of American Jews to Israel in the early years of the State. This was particularly true after WWII, when Jewish identity and Israel went hand in hand.

The relationship has changed a great deal in the decades since the war. Biblical Israel serves as a touchstone from which to be either attached or removed. Modern Israel is either a chimera to be slain or a mythical comrade to be supported. The art of film has attempted to capture these visions, but they are inconsistent. Some break with the past in order to control the future and others are shaped and constrained by the past.

Recent attempts, such as Nancy Spielberg’s documentary “Above and Beyond: The Creation of the Israeli Air Force,” focused on another aspect of Jewish identity: the 1947-48 efforts by Jewish mobsters led by Meyer Lansky to raise money to help the Hagana obtain weapons in the face of an international arms embargo. Spielberg defines the movie, correctly, as “not just a Jewish story but an American one.”

While Israelis have embraced American pop culture in all its aspects, Israeli movies have not really penetrated the American psyche. This is mainly because their appeal to American audiences is so often diminished by their attention to inaccessible aspects of Israeli culture. For example, the 1986 Two Fingers from Sidon dealt with Israel during the first Lebanon War in 1982. It captured what Israelis felt while serving on Israel’s borders, but its message didn’t penetrate American Jewish sensibilities. Israeli filmmaker Ari Folman’s 2008 animated documentary Waltz with Bashir about Israel’s invasion of Lebanon and his own subsequent struggle with PTSD was more successful. Waltz with Bashir was more psychological than historical, and its historical elisions were especially prominent with regard to Sabra and Shatila—an event that has been coopted by Arab-Palestinian propaganda as a tool with which to blame and shame Israel.

The Arab-Israeli conflict does continue to interest and attract fans worldwide, as can be seen in the great success of the Netflix hit series Fauda (Arabic for “chaos”). Fauda is Israeli active defense at its best. It showcases the reality of the Israeli-Palestinian conflict, provides a voice to both Jewish and Palestinian characters, and shows the multiculturalism of the Middle East and Israel that is so often overlooked. In contrast to Leon Uris’s Exodus, about which David Ben-Gurion said that “as a piece of propaganda, it’s the greatest thing ever written about Israel,” Fauda is not hasbara but a slice of cold reality.

In the age of infotainment, the danger is when entertainment completely rewrites both reality and history. Today’s American Jewry is fragmented and conflicted in its relationship to Israel. Film and television can be useful tools in changing the trajectory of American Jewish identity and easing its confusion and discomfort about Israel.