If Biden said he was honored to receive the endorsement of a group that is opposed to jihad violence and Sharia oppression, he would pay a huge political price. But no one will take any particular notice of this. 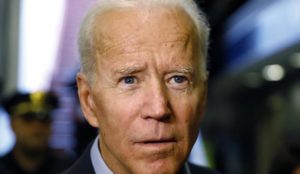 A George Soros-backed Muslim group, which cohosts a conference that in recent years drew speakers who called homosexuality a “disease” and defended terrorist groups, announced its endorsement of Joe Biden for president.
Emgage, which bills itself as the largest Muslim PAC in the country, on Thursday announced it would switch its endorsement from Sen. Bernie Sanders (I., Vt.) to Biden. The group cited Biden’s promises to end President Donald Trump’s travel bans, increase the refugee admissions cap, and overhaul the immigration system. Biden said he was “honored” to receive the endorsement.
Emgage has collaborated with a Muslim Brotherhood-affiliated group on events that in recent years attracted speakers who openly opposed LGBT rights and supported terror groups. Last year, Emgage became an official cohost of Islamic Society of North America (ISNA) conferences. ISNA was previously revealed to be part of the Muslim Brotherhood network—though it claims it is no longer associated with the group.
The 2018 ISNA conference featured an array of homophobic speakers. One was Omar Suleiman, an imam who has called homosexuality a “disease” that will “destroy your children.” Another, former ISNA president Muzammil Siddiqi, said he “supported laws in countries where homosexuality is punishable by death.” Imam Shamsi Ali, an attendee who was described as a “moderate” on ISNA’s website, has stated that homosexuality is an “unbearable plague.”
Meanwhile, ISNA has disinvited pro-LGBT groups Muslims for Progressive Values and the Human Rights Campaign, because they “don’t fit in.”
The 2018 conference also featured individuals who have come to the defense of terrorist organizations. One speaker, Council on American-Islamic Relations executive Zahra Billoo, has regularly defended Hamas and refers to Israel as an “apartheid state.”
Khalid Griggs, who spoke on a panel with Billoo, has referred to al Qaeda as the “presumed perpetrators” of the 9/11 terrorist attacks and said the U.S. government used the tragedy to wage war on “legitimate resistance fighters” in the Middle East. Griggs previously launched a petition calling on the Obama administration to pardon former Black Panther Jamil Abdullah Al-Amin, better known as H. Rap Brown. Brown is serving a life sentence as a convicted cop killer.
Also included in that year’s speaker lineup was Suhaib Webb, a Boston-based imam who held a fundraiser for Brown’s criminal defense fund. Webb hosted the event with Anwar al-Awlaki, an imam who preached to two of the 9/11 hijackers, joined al Qaeda, and was eventually killed in a drone strike.
Anti-Israel activist Linda Sarsour, who in 2004 called for a violent “intifada” in the United States, also spoke on a panel at the conference. During the panel Sarsour warned against “humanizing” Israelis, according to audio published by the Algemeiner. Hatem Bazian, head of American Muslims for Palestine, the agent of which has defended terrorists in court, was on the panel with Sarsour….