Israel Shines in the Gulf Where Big Powers Falter—and That Could Be Tricky - Dr. James M. Dorsey

If there is one lesson the Gulf States have learned from the reduced commitment of the US to the region and the strains in US-Saudi relations, it is that putting one’s eggs in one basket is risky business. 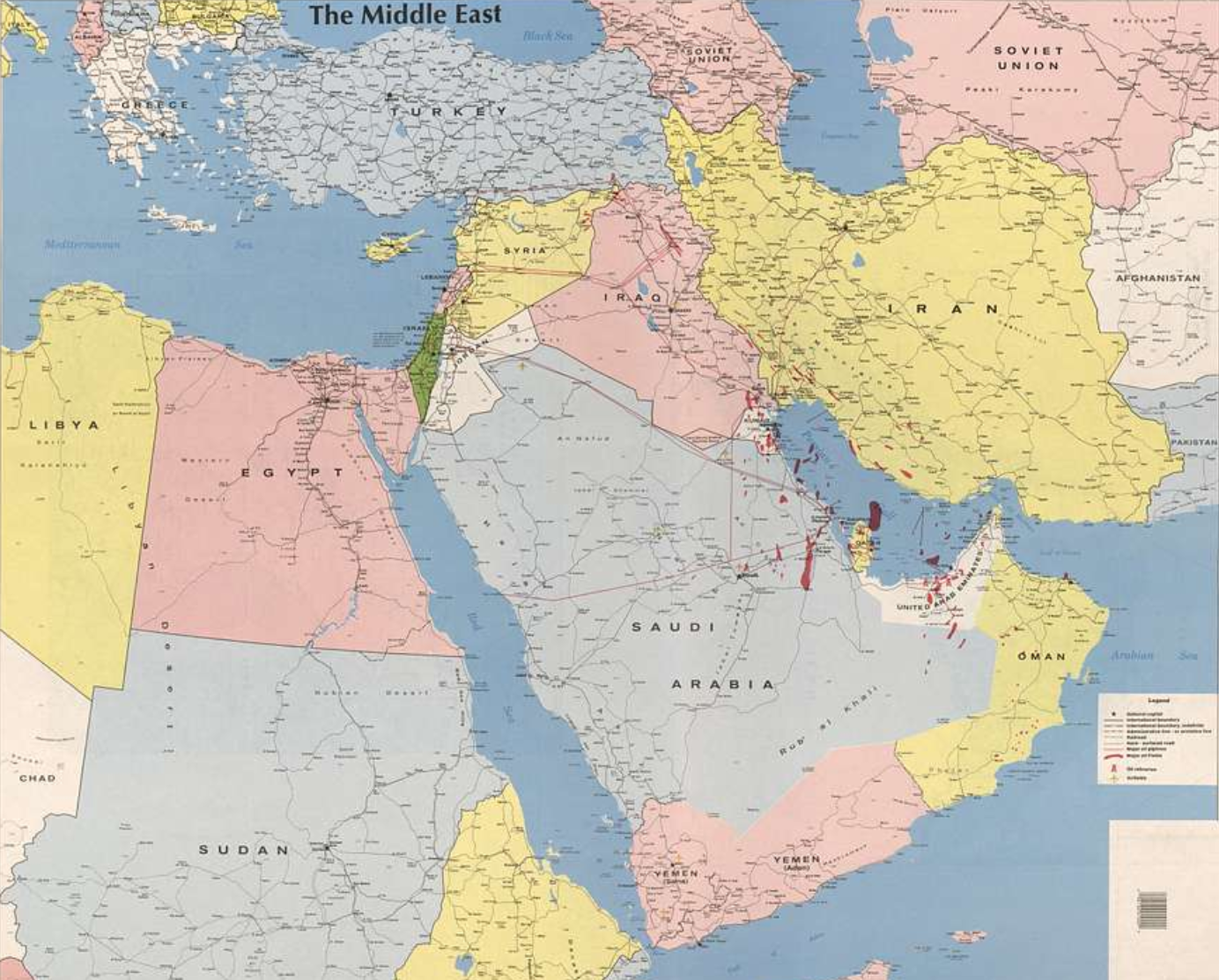 CIA map, US Library of Congress, via picryl

EXECUTIVE SUMMARY: Israel is proving to the Gulf States that it is a more reliable partner in some respects than big powers like the US, China, or Russia. But the limits of cooperation with Israel could come to the forefront at a time of economic crisis in which the Gulf States are likely to have to renegotiate longstanding social contracts.

The Firefly, an Israeli-built loitering kamikaze drone, part of the Spike family of missiles that the Jewish state has sold to various European nations, may be one reason why Gulf States, particularly Saudi Arabia, have cozied up to Israel in a seeming reversal of their past support for Palestinian rights.

If there is one lesson the Gulf States have learned from the reduced commitment of the US to the region and the strains in US-Saudi relations, it is that putting one’s eggs in one basket is risky business.

That has not prevented the US from continuing to secure its place as the region’s foremost arms supplier, as recent arms and related commercial deals prove.

The US Defense Department announced a $2.6 billion Saudi deal to acquire 1,000 air-to-surface and anti-ship missiles from Boeing. Within days, Saudi Arabia’s Al Tadrea Manufacturing Company tweeted that it had reached an agreement with Oshkosh Defense to establish a joint venture to manufacture armed vehicles in the kingdom.

The Public Investment Fund, Saudi Arabia’s sovereign wealth fund, disclosed separately that it had recently taken a $713.7 million stake in Boeing at a time when the company, already suffering major setbacks because of its 737-Max fiasco, took a significant hit as a result of the collapse of the civilian aviation industry in the wake of the coronavirus crisis.

The continued Saudi arms focus on the US has not deprived China of opportunities. China stepped in to help Saudi Arabia produce unmanned military vehicles after the US refused to sell its MQ-9 Reaper killer drone to the kingdom. Riyadh expects production to start next year.

Like China, Russia has been urging Saudi Arabia to purchase its acclaimed S-400 anti-missile defense system. So far, the kingdom, having watched the US cancel NATO-member Turkey’s purchase of US F-35 fighter jets and its co-production agreement of some of the plane’s components after it acquired the Russian system, has been reluctant to take the Russians up on their offer.

The limitations of Saudi-Russian cooperation have since become obvious with April’s price war between the two major oil producers, which sent oil markets into a tailspin from which they are unlikely to recover any time soon.

Israel, like China and Russia and unlike the US, puts no problematic human rights or weapons use restrictions on arms sales in accordance with international law.

But Israel has a leg up on its Chinese and Russian competitors, who maintain close ties to Iran. Israel shares with Saudi Arabia and the UAE a perception of Iran as an existential threat and a destabilizing force in the Middle East that at the very least needs to be contained.

To be sure, that is a perception that Saudi Arabia and the UAE see reflected in the US’s maximum pressure policy toward Iran, which aims to force the Islamic Republic to change its behavior if not its regime.

The problem is that maximum pressure two years into the imposition of harsh US economic sanctions has produced little result.

Add to that the fact that the US has proven to be an unreliable ally when the chips are down. This has persuaded the UAE and other smaller Gulf states to reach out to Iran to ensure that their critical national infrastructure does not become a target in any future major US-Iranian military conflagration.

The watershed moment for the Gulf States was when the US failed to respond forcefully last spring and summer to alleged Iranian attacks on key Saudi oil facilities as well as oil tankers off the coast of the UAE.

Weeks later, the Trump administration, in a bid to reassure the Gulf States, sent troops and Patriot anti-missile defense systems to Saudi Arabia to help it protect its oil installations, although the US has since withdrawn two of those systems.

It took the killing of a US military contractor in December 2019 for the US to respond to dozens of Iranian-backed attacks on American targets in Iraq. When it did, with the killing in January of Iranian general Qassem Soleimani, the Gulf States privately celebrated the demise of their nemesis but also feared that it was overkill that might bring the Middle East to the brink of all-out war.

The Gulf States are likely to find that cooperation with Israel has its limits too. Israel may be eager to sell weaponry and have the capability to push back at Iran in Syria. If need be, Israel can also severely damage, if not take out, Iranian nuclear and missile facilities in military strikes that the Gulf States would be unable to carry out.

But ties to Israel remain a sensitive issue in the Gulf and elsewhere in the Arab and Muslim world. And Israel has so far restricted sales to non-lethal equipment and technology. That could change with a resolution of the Israeli-Palestinian conflict and the establishment of formal diplomatic relations.

Public opinion, however, may be one reason why the Gulf States have refused to turn unofficial relations into diplomatic recognition, suggesting that there may be greater public empathy for Palestinians than Gulf rulers wish to admit.

That could count for more with Gulf rulers who are finding it increasingly difficult to provide either jobs or public goods and services as a result of the global economic crisis and the collapse of oil prices.