Bloomberg is luring the party’s elites into visibly betraying the principles most of its rank-and-file hold dear and identifying themselves as sellouts who can be bought by sheer force of lucre. A bitter split will be hard to avoid.

Right before our eyes, a mega-billionaire is buying the presidential nomination of a political party, and oddly enough, it is the party that decries inequality of wealth and whose leading lights debate taxing billionaires out of existence.
This will not end well for the Democrats. Bloomberg is luring the party’s elites into visibly betraying the principles most of its rank-and-file hold dear and identifying themselves as sellouts who can be bought by sheer force of lucre. A bitter split will be hard to avoid.
Holman Jenkins of the Wall Street Journal gets right to the point in his headline” “Bloomberg buys the Democratic elite.” It is not the rank and file getting rich off of Bloomberg, but rather the ostensible leadership class, and therein lie the seeds of destruction for the party that purports to be about the common man, woman, and nonbinary individual.
He’s distorting the incentives of activists, officials and campaign fixers who suddenly are thinking less about a presidential victory and more about the Bloomberg gravy train.
Jenkins cites these examples of leaders betraying their people and their principles:
When a recording leaked of Mr. Bloomberg defending stop-and-frisk in New York, Andre Fields of the liberal voting-rights group Fair Fight Action rushed out a tweet hitting him as a “true terrorist” but promptly deleted it. Fair Fight Action had received $5 million in funding from Mr. Bloomberg.
At a historic moment when “quid pro quo” is a talking point on the left, this looks awfully bad. It is far from unique, though. Bloomberg’s stop and frisk policies as New York mayor, and his surprisingly frank discussion of criminality and race in Aspen, including his callous reference to throwing young African Americans “against the wall,” directly speak to trigger issues hyped by the Democrats for the last several years. Yet, some prominent black political leaders are endorsing him:
Three members of the Congressional Black Caucus helped out with timely endorsements of a man who spent at least $90 million on House Democratic races in the last 19 months.
Opinion leaders are also compromised:
New York Times columnist Tom Friedman on Wednesday joined in with 1,500 words implying that other Democratic candidates should make way for Mr. Bloomberg. He ended his piece with a disclosure that his wife’s charity was supported with Bloomberg donations.
Jenkins makes a strong case that Bloomberg cannot be elected and that his money is destroying the chances of candidates with a better shot at victory, pointing out that his massive purchases of broadcast airtime is driving up the cost for other candidates to get their messages out. The substantial share of the Democrat base that is hard left will never turnout and vote for him. With supporters of Bernie Sanders already convinced (with evidence) that the 2016 nomination was stolen from him, the chances are nil that they will vote in large numbers for the man who has bought support from some of their party leaders. Instead, there is a decent chance that they will either stay home or support a splinter or small party radical leftist candidate.
To Jenkins’s observation that “ads have sharply diminishing returns,” I would add that they become annoying and anger-inducing past a certain point. Already in California, we are being saturated, and there are still 8 and a half months of TV and radio annoyance to come.
The Democrats have always been simultaneously the party of the elites and the party of the dependent classes, pretending to protect the latter while enriching the former. At the precise moment when left wing radicals sincerely aiming at taxing and regulating the wealthy out of their financial perch are daring to speak openly of confiscating wealth, along comes a man who laughs in their faces and proves that many of their ostensible leaders will sell them out.
At some point, as the anger intensifies, expect cries to be heard that Bloomberg is a Republican plant, deliberately sent to destroy the Democrat party, perhaps at the instigation of his former golf companion, Donald Trump, who is now the fount of all evil: 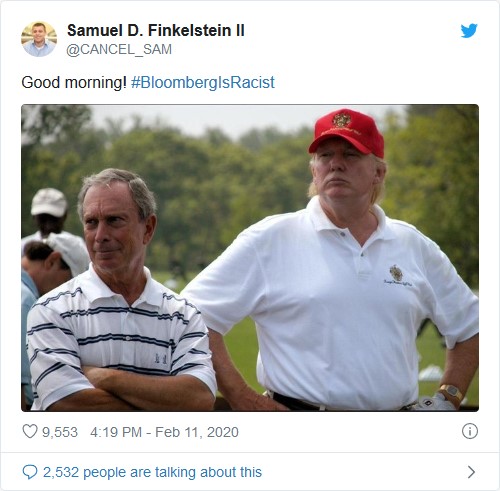 One person who gets it is President Trump:


"Yeah, he's got money, but you know, they've spent $2 billion on me, Hillary Clinton, on mostly negative adds, and I won. And I won really easily if you look it. You know, the Electoral College, I won some states that were — I won by massive numbers. She spent $2 billion, they had a $2 billion campaign. He won't have that much and frankly, he's so deficient in so many ways that I think he'd be easier than Bernie. Bernie has a — and I also think this. If a guy came in and bought the election, if they bought the Democratic nomination, I really think you'd have a revolution within the Democrat Party. You had a mini-revolution last time, right, but you would have a real — because they took it away from him the last time, or at least it was perceived. She actually — you know, she got more votes than him and everything else, so I view that a little bit differently. But a lot of people perceive that they took it away from him. But this time they would be taking it away. If a guy came in to buy it and took it away from Bernie, I think you'd have a revolution within that party."