Iran’s rapid development of missile expertise has raised concerns in Washington and among its allies about Tehran’s intentions. 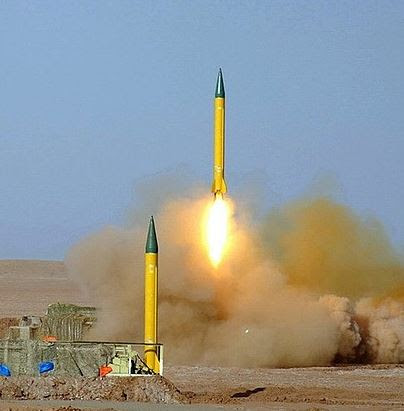 EXECUTIVE SUMMARY: Iran’s rapid development of missile expertise has raised concerns in Washington and among its allies about Tehran’s intentions. Despite international censure, the Revolutionary Guards have been able to develop the largest and most diverse ballistic missile arsenal in the region. Tehran is determined to develop and acquire ever more advanced and accurate ballistic missiles – but its efforts to achieve that goal are hampered by American and Israeli determination to subvert it.

A key component of Iran’s military doctrine is the development of an indigenous ballistic missile program, and the country’s rapid development of missile expertise has raised concerns in the US and among its allies.

Iran embarked on an indigenous ballistic missile program in 1986, when the Revolutionary Guards created a “self-sufficiency unit” to develop military industries that would not require assistance from other countries. Headed by Gen. Hassan Tehrani-Moghaddam, the “founding father” of the Iranian missile program, the unit was essentially an R&D facility for missile technology.

By reverse-engineering Soviet-era Scud technology, Tehrani-Moghaddam enabled the Guards to develop the largest and most diverse ballistic missile arsenal in the region. It includes the Shahab-1 (based on the Scud-B), the Shahab-3 (based on original Scud-C technology), the Ghadr 110 and its variants, the Emad, the Shahab-4, the Shahab-5 (Kosar), the Shahab-6 (Toqyān), the Fajr-3, the Qiam, the Ashoura, and the Sejjil. They are all capable of carrying nuclear warheads.

Tehrani-Moghaddam died in November 2011 in an explosion in his research office at the Alghadir missile base at Bid Ganeh, near Tehran, reportedly in an operation carried out by the Mossad. The Iranians continued advancing the missile program quietly and produced new types of missiles, including the Dezful, the Hoveizeh, and the nuclear-capable Zolfaghar and Khorramshahr.

Despite international concerns over Iran’s ballistic missile program, the Obama administration decided to compromise with Tehran on that program in exchange for concessions on its nuclear program, which was a high priority strategic concern for his administration. In a further compromise, Washington softened the language of UNSC Resolution 1929 (2010), which stipulated that “Iran shall not undertake any activity related to ballistic missiles capable of delivering nuclear weapons.” Resolution 2231, which passed on July 20, 2015 and which endorsed the nuclear deal, used more permissive language: “Iran is called upon not to undertake any activity related to ballistic missiles designed to be capable of delivering nuclear weapons.”

With the nuclear agreement reached and the legal loophole created, the Iranians set about putting more effort into their ballistic missile program. As a result, their missiles have become a target of renewed international attention, and consequently the subject of numerous rounds of sanctions. The Trump administration decided to withdraw the US from the nuclear agreement in part on the grounds that it does not address Iran’s ongoing ballistic missile program.

Sanctions notwithstanding, Iran has not faltered in ramping up its ballistic missile and space programs. According to Brig. Gen. Amir Ali Hajizadeh, commander of the Revolutionary Guards’ aerospace program, Iran conducted seven test flights in 2018, in addition to six Qiam missiles fired into an ISIS stronghold in Syria’s Deir ez-Zor province in January 2018. One Khorramshahr, two Shahab-3 variants, one Qiam, and three Zolfaghar ballistic missiles were flight-tested between February and August 2018, which, according to the President of the UN Security Council, was “in violation of resolution 2231” because the missiles were all category I systems under the Missile Technology Control Regime (MTCR) and capable of carrying nuclear warheads.

In August 2018, Iran’s defense ministry unveiled two new missiles: the Fakour and the “Fateh Mobin” (Bright Conqueror), the latest addition to the Fateh-series of short-range tactical ballistic missiles with a range of about 1,300 km. On December 1, 2018, the Revolutionary Guards tested the Khorramshahr medium-range ballistic missile at its facility near Shahrud in Iran’s northeast. On February 2, 2019, Tehran announced the successful test of the Hoveizeh cruise missile with a range of over 1,350 km during celebrations marking the 40th anniversary of the 1979 Islamic Revolution. On February 7, the Revolutionary Guards unveiled a new ballistic missile, the Dezful, which has a range of 1,000 km. Iran’s PressTV quoted Gen. Hajizadeh as saying the Revolutionary Guards will “continue missile tests…and plan to carry out more than 50 missile tests each year.”

Tehran says its ballistic missiles are for defensive purposes, but because ballistic missiles capable of carrying a nuclear warhead are an integral part of a nuclear arsenal, its efforts to develop ballistic missile capabilities may reflect its desire to continue with its nuclear weapons program. This is a reasonable suspicion in view of Tehran’s record of conducting covert nuclear activities at its nuclear sites, namely the Parchin and Kolahdouz military complexes. Proving Iran’s peaceful intentions is difficult because ballistic missiles can be used in both a defensive and an offensive capacity, not to mention that a cost-benefit analysis does not justify mounting conventional payloads on long-range missiles.

Despite warnings from the US that the Iranians call “empty threats,” Tehran has continued R&D and is testing its capabilities in ballistic missiles. On the night of January 14-15, 2019, a Simorgh (Phoenix) space launch vehicle lifted off from the Imam Khomeini Space Center in Semnan province. It carried the Payam (Message) Amirkabir satellite, which is described as carrying four cameras for scientific earth observation from low earth orbit. The experiment failed, however, and the satellite did not manage to enter orbit. According to Minister of Communications and Information Technology Muhammad-Javad Azari Jahromi, the rocket carrying the satellite “failed to reach escape velocity in the third stage, though it succeeded in the first two stages of the launch.”

Only a few weeks after the Simorgh failure, on February 5, 2019, the Guards launched a second satellite, the Doosti (Friendship), a remote-sensing satellite developed by engineers at Tehran’s Sharif University of Technology. Deputy Defense Minister Gen. Ghasem Taghizadeh announced the successful placement of the Doosti Satellite in earth’s orbit and confirmed that a new, advanced Iranian-made communications satellite, the Tolou (Dawn), will be launched in the next three to four months. However, satellite images released by DigitalGlobe and Planet, two companies that specialize in space imaging, suggest that Iran’s second attempt to launch a satellite into space has also failed.

Iran’s military and political officials attributed the two rocket failures to a secret Washington program to sabotage Iran’s missile and space programs. Gen. Hajizadeh accused US and Israeli intelligence agencies of engaging in campaigns of “infiltration and sabotage” of Iran’s missile complex. Javad Zarif, Iran’s foreign minister, also said it was possible that the poor performance of the missiles was because of a sabotage campaign by the US.

The New York Times, which interviewed unidentified US officials, revealed that the Trump administration has accelerated a secret project to subvert Iran’s missile and space program, a plan described as “a far-reaching effort to slip faulty parts and materials into Iran’s aerospace supply chains.” Tehran insists that its satellite launches have no military value, but the US and its allies believe its space program is merely a cover for its efforts to develop a ballistic missile capable of carrying nuclear warheads.

The Iranians are determined to develop and acquire more advanced ballistic missiles in the future and will probably continue to transition from liquid to solid propelled systems, which are more sustainable. Iran may also concentrate on improving the missiles’ accuracy, which is poor at present. But it is not clear whether they will be able to achieve these goals given strong objections from the US and Israel and their efforts to subvert the programs.

Dr. Farhad Rezaei is a member of the  Association for the Study of the Middle East and Africa (ASMEA) in Washington, DC and co-authored (with Ofira Seliktar) Iran, Israel, and the United States: The Politics of Counter-Proliferation Intelligence (NY: Lexington Books). @Farhadrezaeii