Meet Saikat Chakrabarti, the Rasputin of the 14th Congressional District and arguably the real brains behind the bright new shiny Democrat bauble of Congress now famously branded by the media as AOC, joining the exclusive club (JFK, LBJ, RFK, HRC) of politicians widely referred to by three initials.

In the space of just a few short months, Alexandra Ocasio-Cortez, with fewer than 16,000 votes in a primary election, went from the role of obscure bartender to perhaps the most famous and powerful freshman member of Congress ever. She instantly became a media darling who drives ratings and Internet clicks. Senior Democrats such as Sen. Ed Markey gush over her and edge in to get their picture taken with her as they appear to hang on her every word.

Ocasio-Cortez was given a plum seat on the House Financial Services Committee. Her placement on the exclusive House Banking Committee, as well as the appointments of other newbie progressives to top committees was part of a larger deal to re-secure the speakership for Nancy Pelosi ahead of the midterms. Pelosi agreed to 40 percent progressive representation on the five top House committees.

How could this have happened? Look behind the curtain. You’ll find her mysterious chief of staff, Saikat Chakrabarti, a well-funded radical left wing activist who, with other veterans of the 2016 Sanders campaign, including “Young Turks” host Cenk Uygur (later purged over past allegedly sexist, racist, pro-rape statements), established a web of campaign organizations and LLC’s, including Justice Democrats and Brand New Congress. As many as 16 groups were housed in the same office space in Knoxville, TN, with no apparent legally-required “walls of separation.”

The larger plot was and remains to recruit attractive people to run for Congress. The longer-term strategy seems to be to gain control of the Democrat Party, Congress and ultimately the United States government itself. Their stated goal “was to run hundreds of Democratic candidates” who do "not take corporate money and serve the voters rather than the donors," as well as "capture a significant amount of Congress with strong progressives" and "overpower the corporate Democrats."

In the 2018 elections, 26 of the 79 candidates endorsed by Justice Democrats won their respective primary elections. Along with AOC, six other of these progressive minority candidates won in the general election: Raúl Grijalva, Ro Khanna, Ayanna Pressley, Rashida Tlaib, Ilhan Omar and Pramila Jayapal. The districts where they won were all solidly Democrat. This suggests why the far left wing newbies were not only given key committee assignments and but quickly found senior Democrats fawning over them. When Rep. Ilhan Omar was accused of anti-Semitic remarks, Democrats could not find the will to directly condemn her. Instead they passed a watered down meaningless resolution against hate. Pelosi and other establishment Democrats are understandably afraid of who will be targeted by the Justice Democrats in 2020 and they don’t want to antagonize them.

With the win, Chakrabarti became AOC’s chief of staff. He and his left-wing associates, including her communications chief Corbin Trent, co-founder of Brand New Congress, and Sanders campaign veteran Zack Exley (an open borders advocate) had scripted and produced AOC’s campaign video and organized her entire grass roots campaign effort, including fund raising and social media. They turned her into a brand to take control of the House seat from Crowley. There is evidence that most all of Ocasio-Cortez’s communications are created by these men who appear to tell her what to say.

Watch as the video below as it shows Trent talking about 40% of Americans, or 160 million people making less than $20,000 a year and then five days later, obviously reading from a script, Ocasio-Cortez makes the identical claim.

With Chakrabarti as Ocasio-Cortez’s chief of staff, Ocasio-Cortez released the highly controversial far-left policy initiative known as the Green New Deal. It is designed to totally and fundamentally make over the American economy and the American political system. Casio-Cortez’s office, led by Chakrabarti, released an “FAQ” which it withdrew after criticism for its extremist positions, including appearing to demand the elimination of animal agriculture, replacing commercial aviation with “high-speed rail,” and providing “economic security for all who are . . . unwilling to work.” Chakrabarti was forced to admit the office’s authorship of the FAQ after Green New Deal supporters retweeted Rep. Ocasio-Cortez asserted quotes from the document about “unwilling to work” were fabricated.

The Green New Deal was drafted over a single December weekend by Ocasio-Cortez’s staff and representatives of like-minded progressive groups including the Sunrise Movement, a grassroots climate organization; the Justice Democrats and a freshly organized policy shop called the New Consensus. Chakrabarti was quoted as saying, “We spent the weekend learning how to put laws together. We looked up how to write resolutions.” It’s unclear whether AOC was even present.

A complaint was filed with the Federal Election Commission alleging that two political action committees founded by Chakrabarti funneled over $1 million in political donations into two of his own private companies. The cash transfers from the PACs that he manages make a mockery of her pledges to increase transparency and reduce the influence of "dark money" in politics. His companies appear to have been set-up for the sole purpose of obscuring how the political donations were used.

The arrangement skirted reporting requirements and may have violated the $5,000 limit on contributions from federal PACs to candidates, according to the complaint filed by the National Legal and Policy Center. There was no way of telling where the political donations went — meaning they could have been pocketed or used by the company to pay for off-the-books campaign operations.”

How all this will shake out is uncertain. It’s unlikely, however, that this will deter the main focus and effort of Chakrabarti, who wears his ideology on his shirt. He has been seen on video wearing a T-shirt with the image of Subhas Chandra Bose, an Indian anti-colonial nationalist.

During World War II, Bose tried to overthrow British colonial rule of India with the help of Nazi Germany and Imperial Japan. Bose was personally helped by Hitler who he met with before going to the Dutch East Indies on a Nazi submarine and setting up an Indian composed army to support Imperial Japan. He proclaimed his ideology as a synthesis between Nazism and Communism.

Listen as AOC describes a marriage between the government and corporations in order to regulate what people can and can’t do with their private property/business/investments. 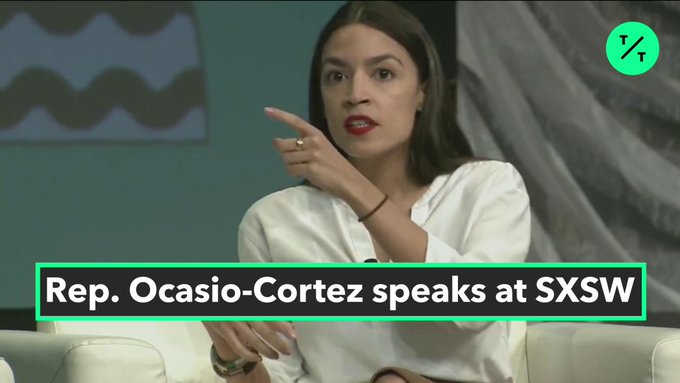 TicToc by Bloomberg ✔ @tictoc
“We should be scared right now because corporations have taken over our government.” @AOC explains why she is in favor of democratic socialism at #SXSW #tictocnews

5,894 people are talking about this

So, you can hardly be shocked when you find Chakrabarti praising freshman congresswoman Ocasio-Cortez for organizing a sit-in at Nancy Pelosi’s as well as helping to chase the intended new Amazon headquarters out of New York. It’s all about disruption. And the Democrats already have the message. Stand with us or we’ll take you out. As her tendency toward demagoguery inevitably grows, the situation will likely become more and more dangerous.

This is who Chakrabarti is and therefore ultimately who AOC is. It easier now to understand why mainstream Democrats are being sucked into the whirlpool of the Left. Some of it is ideology. But much of it is fear. They fear Chakrabarti and his friends will turn the ideological blowtorch and campaign challenges on them. This does not bode well for either moderate Democrats or America.